what we ate at walt disney world 2019 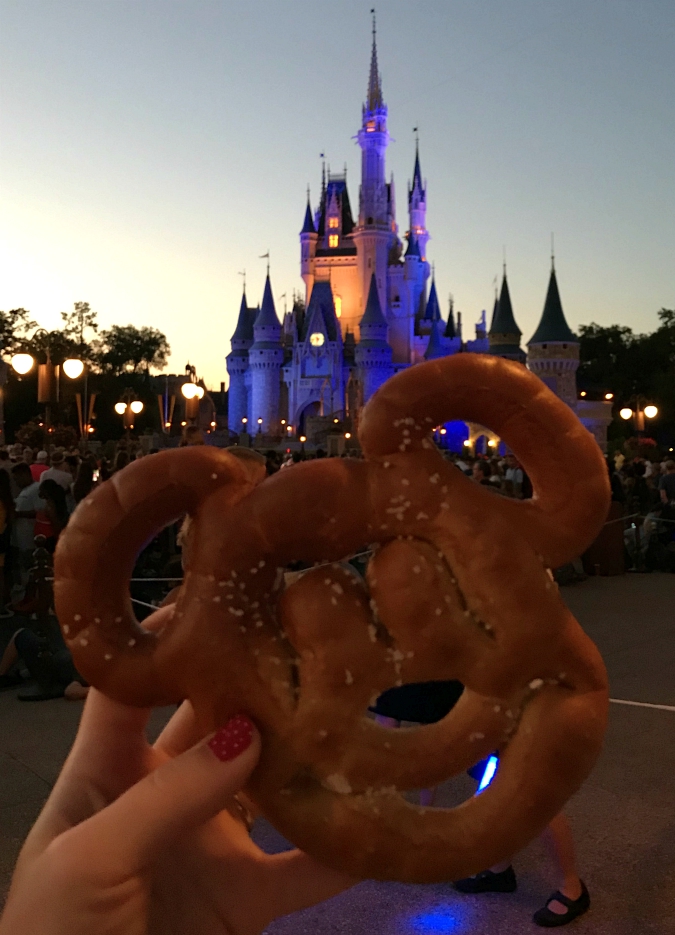 we had a really great time on our disney trip.  if you know us, you know that we can't go anywhere without taking pictures of food.  we had a lot of great things to eat while we were there (including this mickey pretzel that we got at the launching pad while we were waiting for the magic kingdom fireworks to start)!

while we were in disney, we often split meals when possible to save money and because portions were large.  here's an entire post dedicated to what we ate at disney . . . 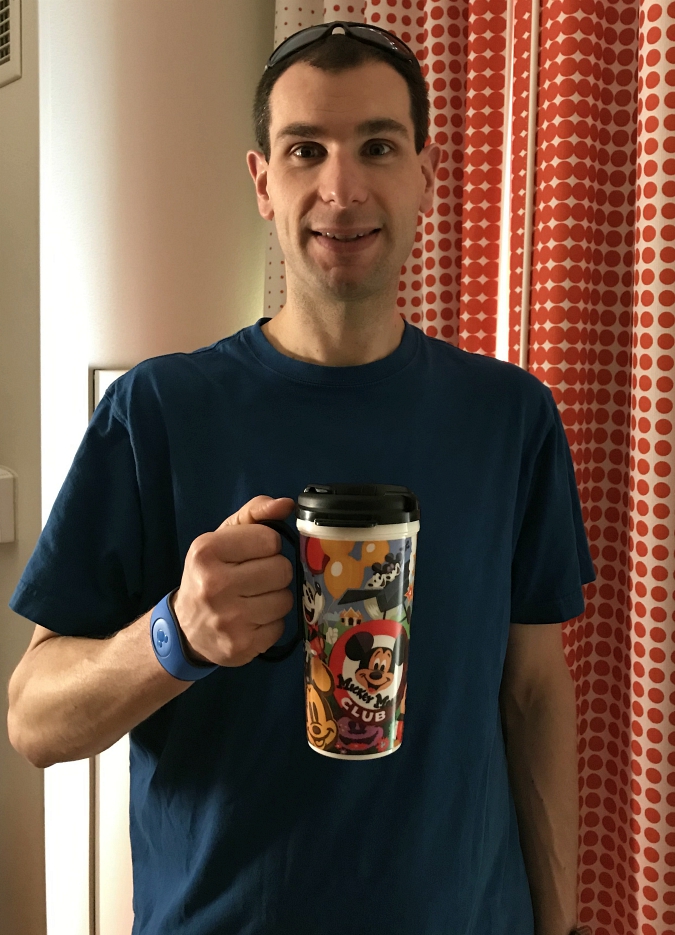 when we went to disney two years ago, we didn't bother getting a disney resort mug because we were only there for three days.  since we were there longer for this trip we purchased one.  it has a chip in it which allows you to use it for the duration of your vacation.  it was much cheaper to purchase the mug with unlimited refills rather then buying ryan a coffee every morning.  we were able to use it for other drinks throughout the day and evening too.  it's also a cute souvenir. 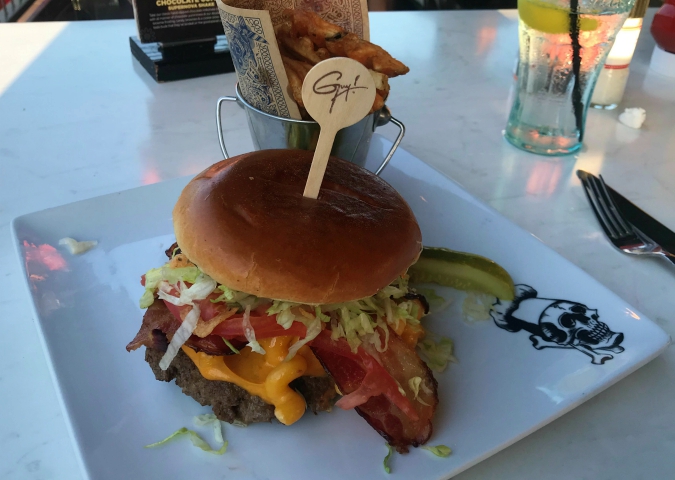 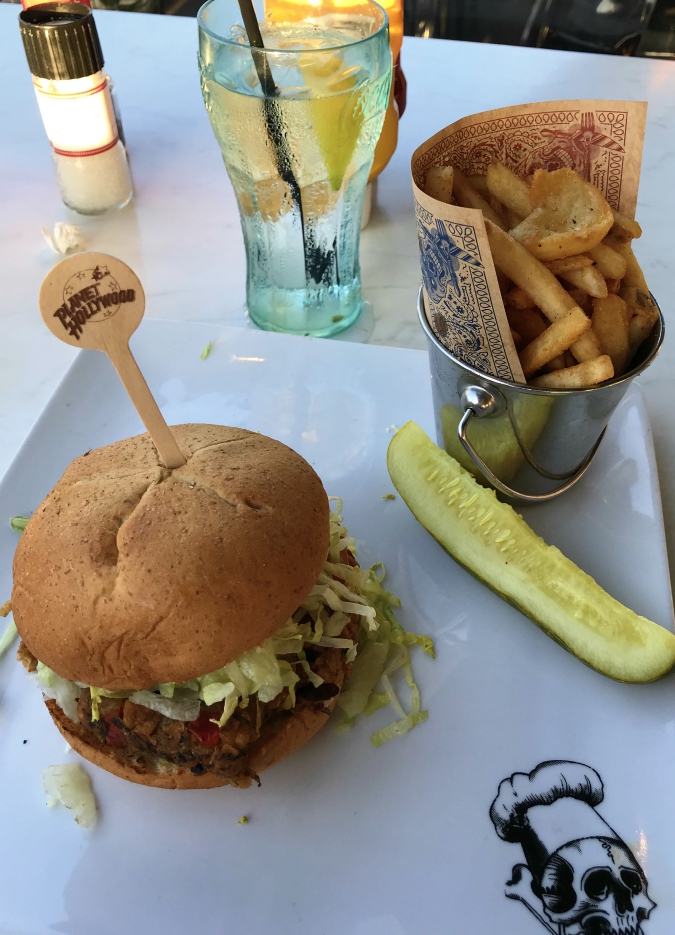 we went to disney springs on the day we arrived since we landed in florida late in the evening.  we had burgers for dinner at planet hollywood (since ryan had never been to a planet hollywood before).  we didn't know that they served guy fieri burgers!  ryan had the bacon mac and cheese burger, and i had the veggie burger. 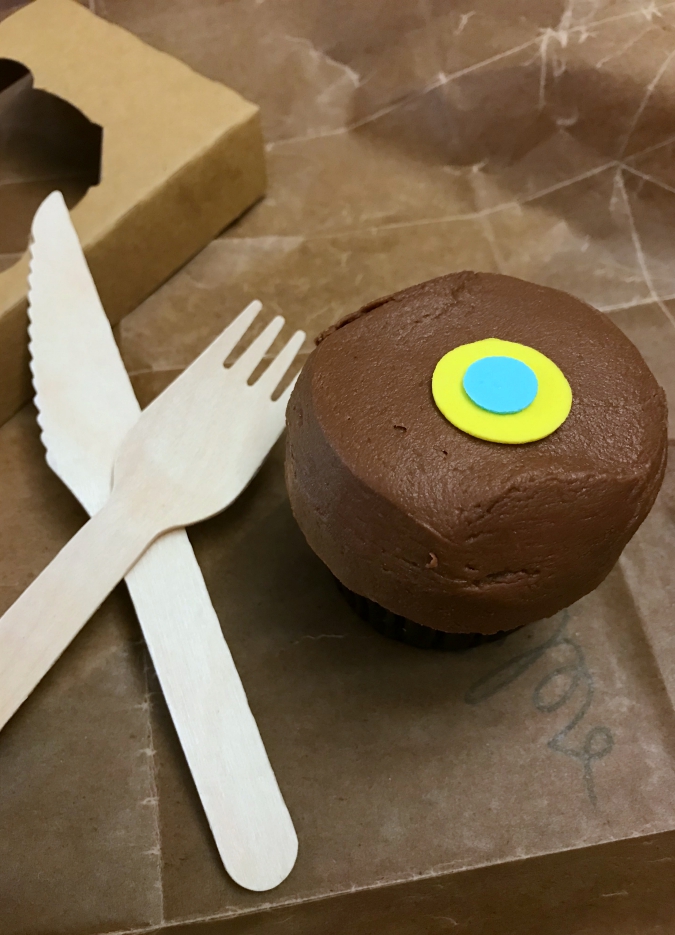 we love to visit sprinkles when we are in nyc.  we saw that there was a sprinkles at disney springs and we just happened to have a coupon on our sprinkles mobile app, so we picked up a dark chocolate banana cupcake to split at night for dessert.  it was so good! 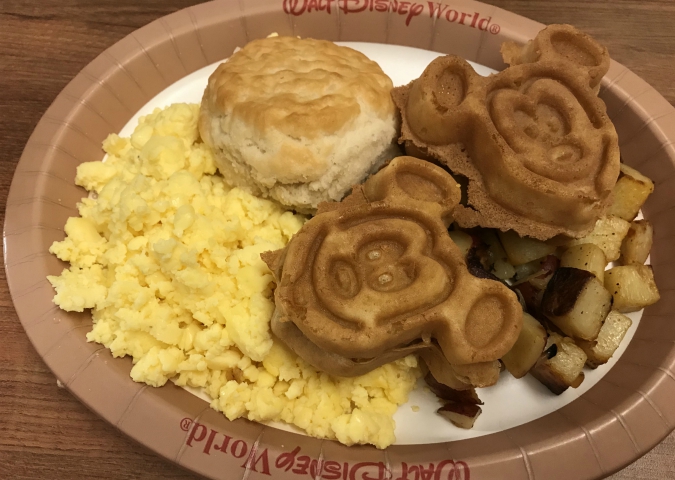 in order to save some money and some calories, we packed almond milk and cheerios in our suitcase.  we ate that for breakfast several mornings, and then alternated with getting a few breakfasts to share from the pop century resort dining hall.  they were good about substituting extra eggs, potatoes, and waffles since we didn't want the meat that came on the platter.  you just have to have mickey waffles when in disney! 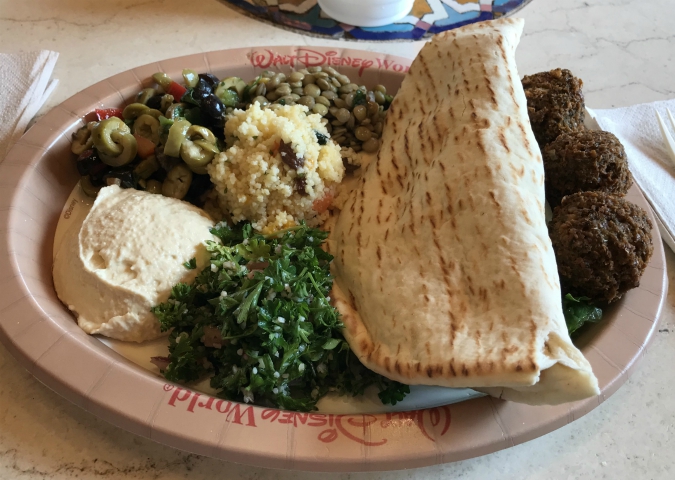 in epcot, we ate lunch in morocco at the tangierine cafe.  we split the vegetarian platter and it was great!  we are always fans of mediterranean food. 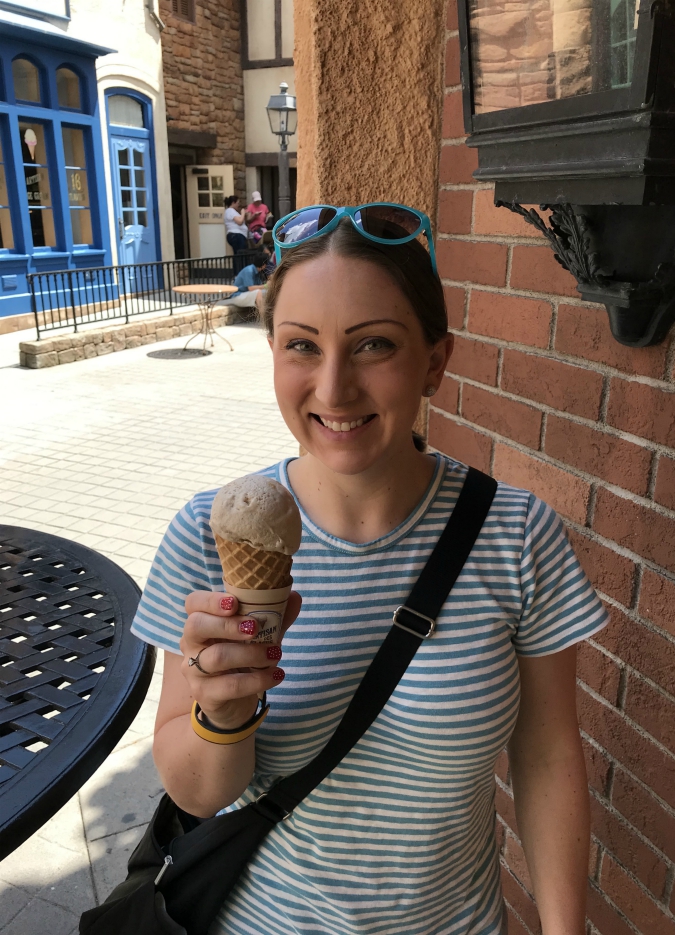 in the afternoon at epcot, we popped into l'artisan des glaces in france for an ice cream cone.  it was apple cinnamon and it was awesome! 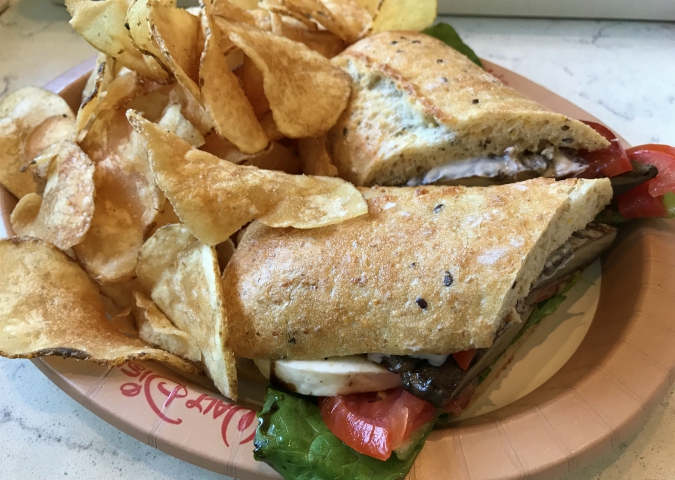 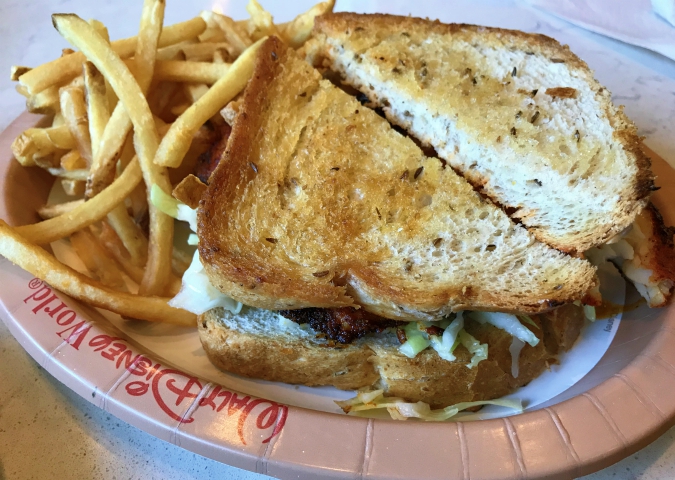 instead of eating dinner in epcot, we had some free time so we hopped on the monorail and went to the grand floridian resort to grab sandwiches at gasparilla island grill.  we got the veggie panini and the fish reuben.  both were really good! 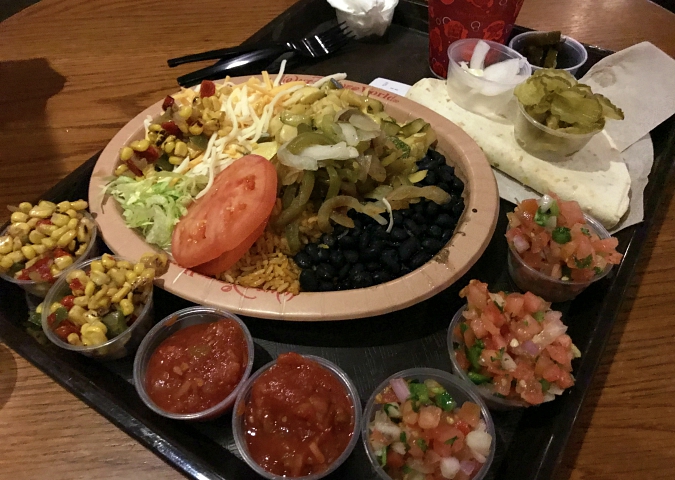 during our first day in the magic kingdom, we grabbed lunch at pecos bill tall tale inn and cafe.  we ate there during our last disney trip and remembered that the veggie fajita platter was huge.  there is an unlimited sides bar which has a crazy amount of fajita toppings too.  it was a lot of food to split for lunch! 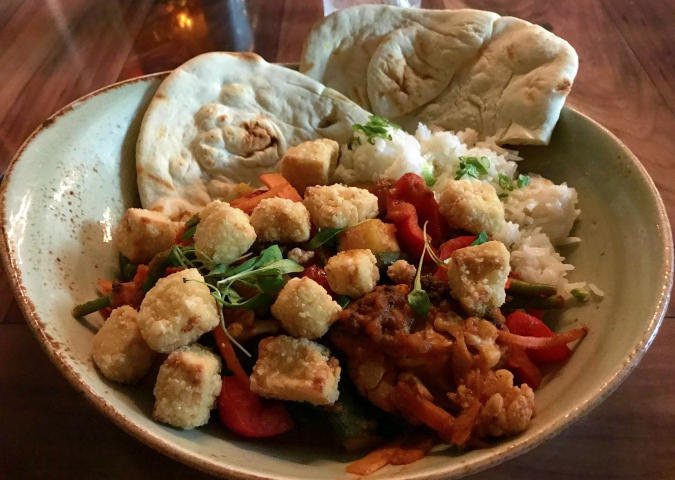 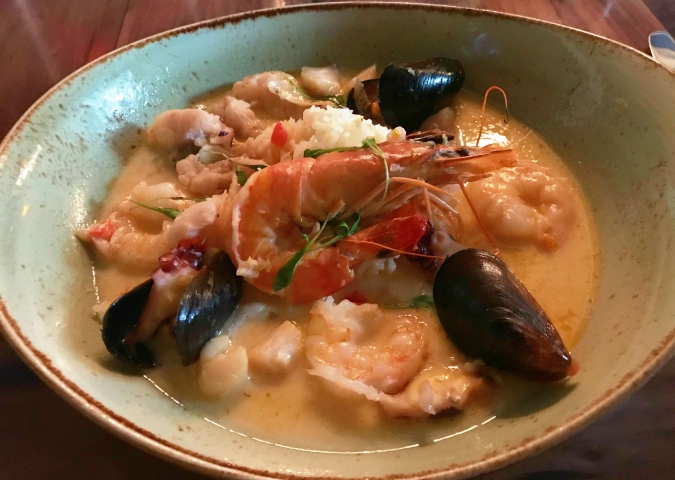 we had dinner in the magic kingdom at the jungle navigation skipper canteen.  we shared the veggie curry tofu stew and the seafood stew. 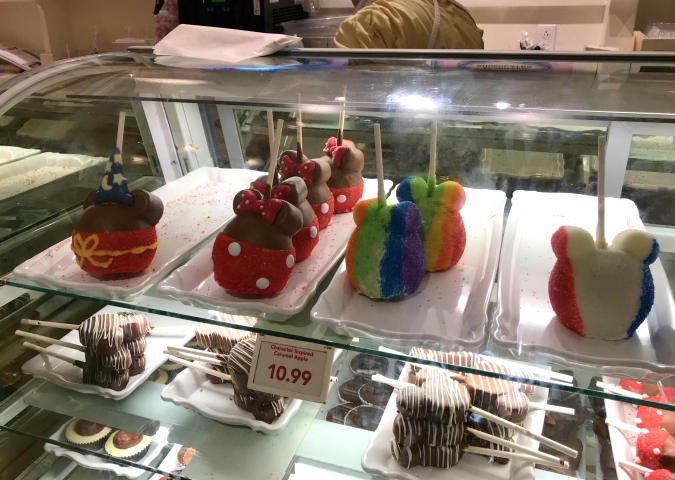 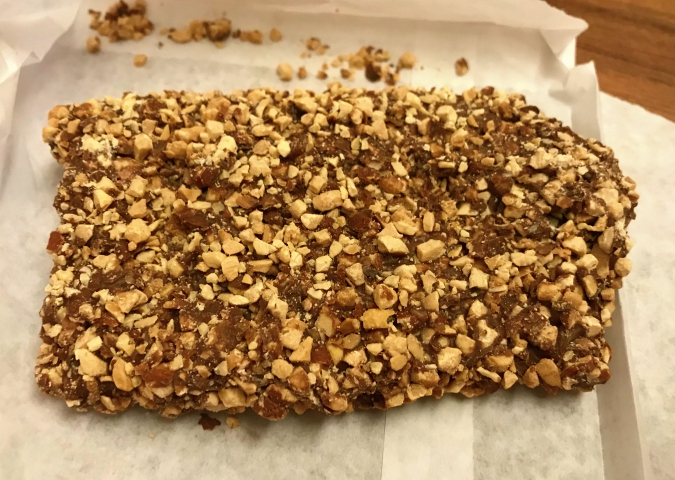 on our way out of the magic kingdom, we stopped in the main street confectionery  we picked up this english toffee bar to eat back at our hotel  it might not have been the most attractive dessert, but it was delicious! 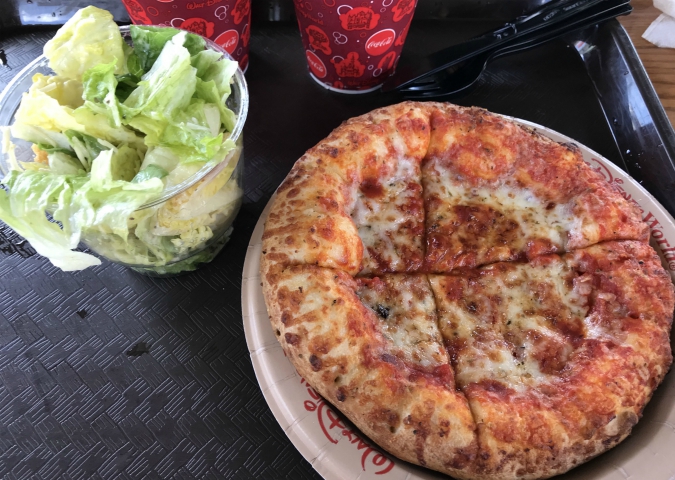 during our day at hollywood studios, we grabbed a quick lunch to split at catalina eddie's.  a personal size cheese pizza, which came with a little side caesar salad was just enough to hold us over. 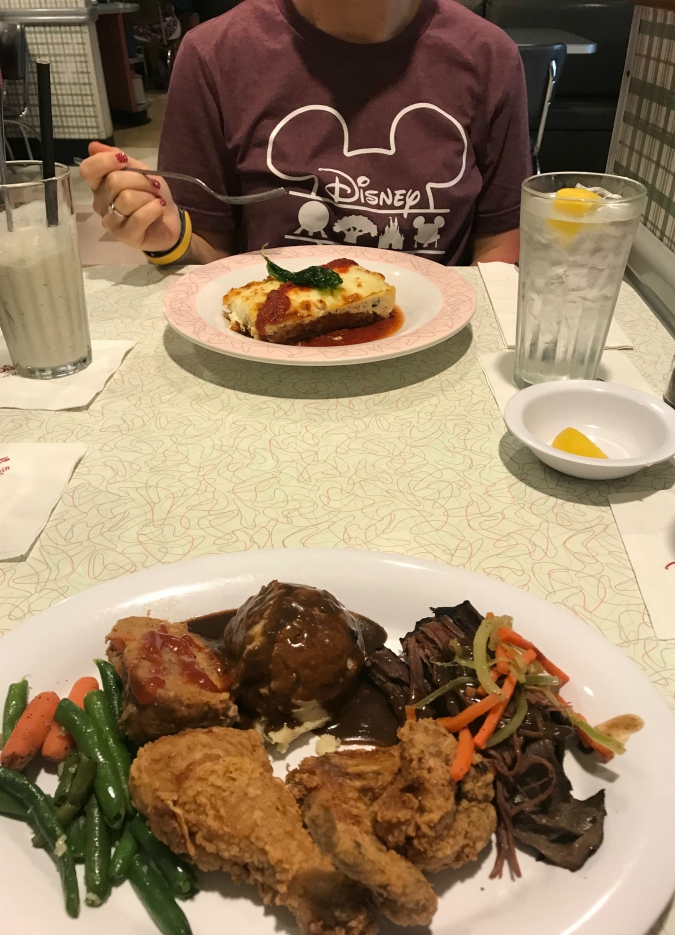 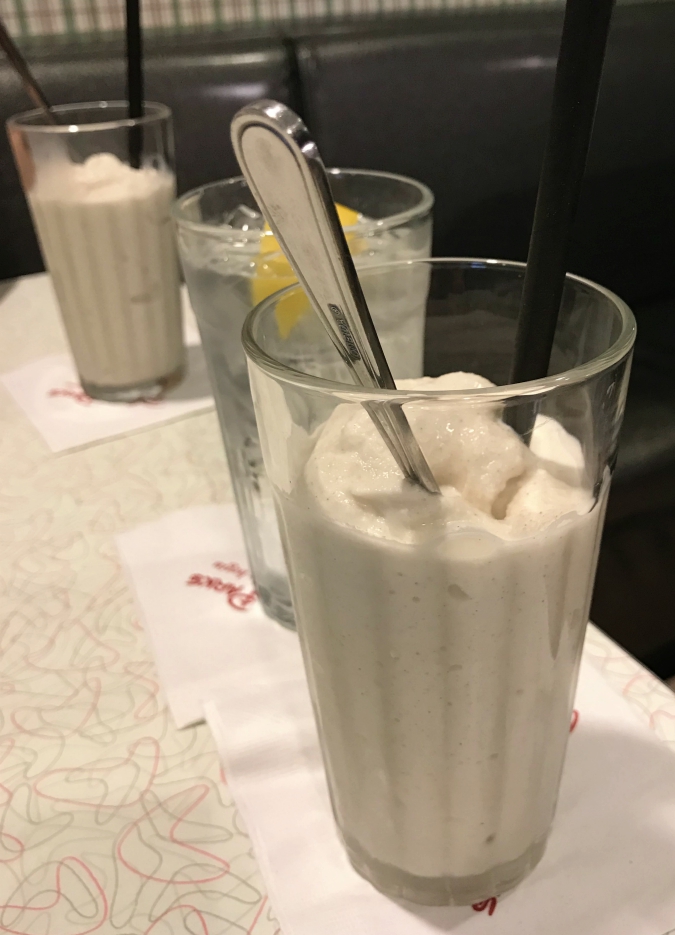 we wanted to do a nicer sit-down dinner at hollywood studios, so we made reservations for the 50s prime time cafe.  the entire restaurant is themed like the inside of a 1950s house and the waitresses stay in character the whole time.  i had the veggie lasagna and ryan had a sampler platter of pot roast, meatloaf, and fried chicken.  we shared their signature peanut butter and jelly milkshake too. 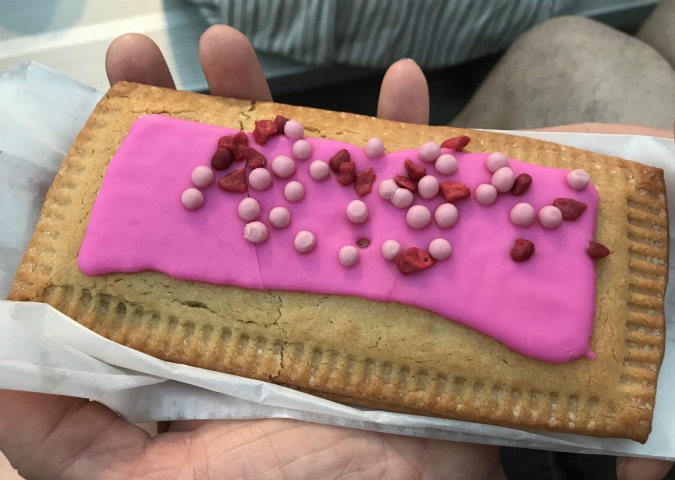 later in the evening in hollywood studios, we stopped by woody's lunchbox in toy story land to grab a dessert and we took it with us and ate it while we were waiting for the night fireworks show to start.  we got one of their raspberry lunchbox tarts.  it was huge and tasted just like a linzer tart cookie! 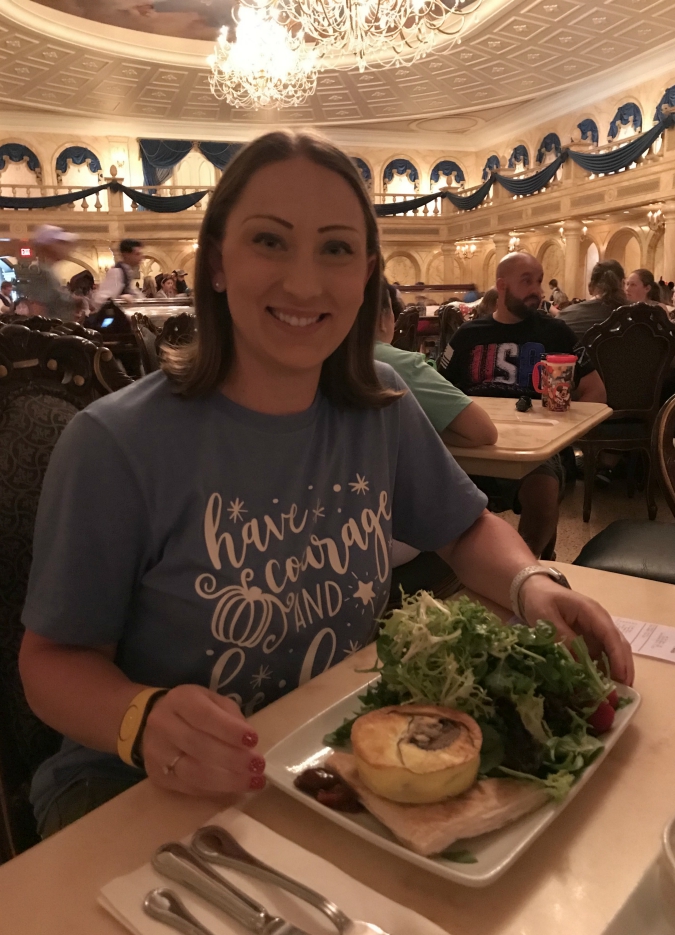 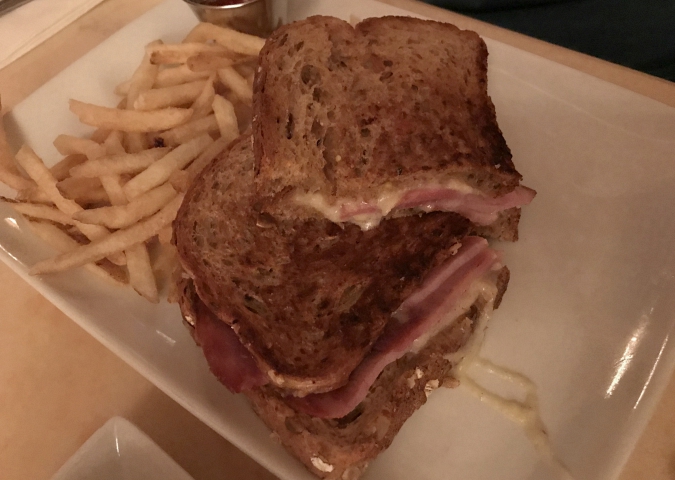 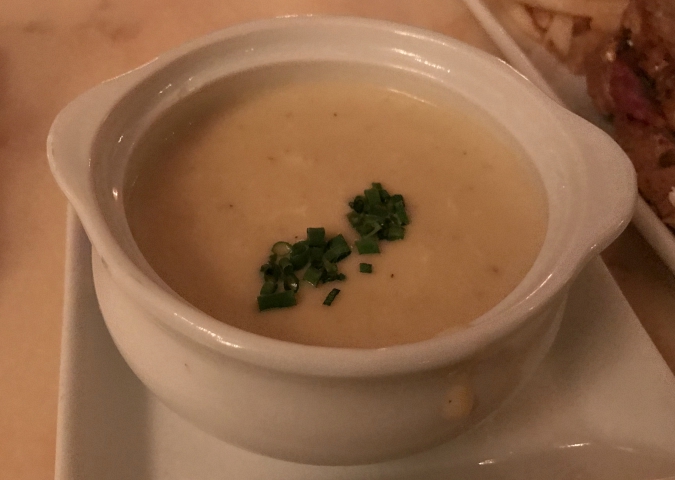 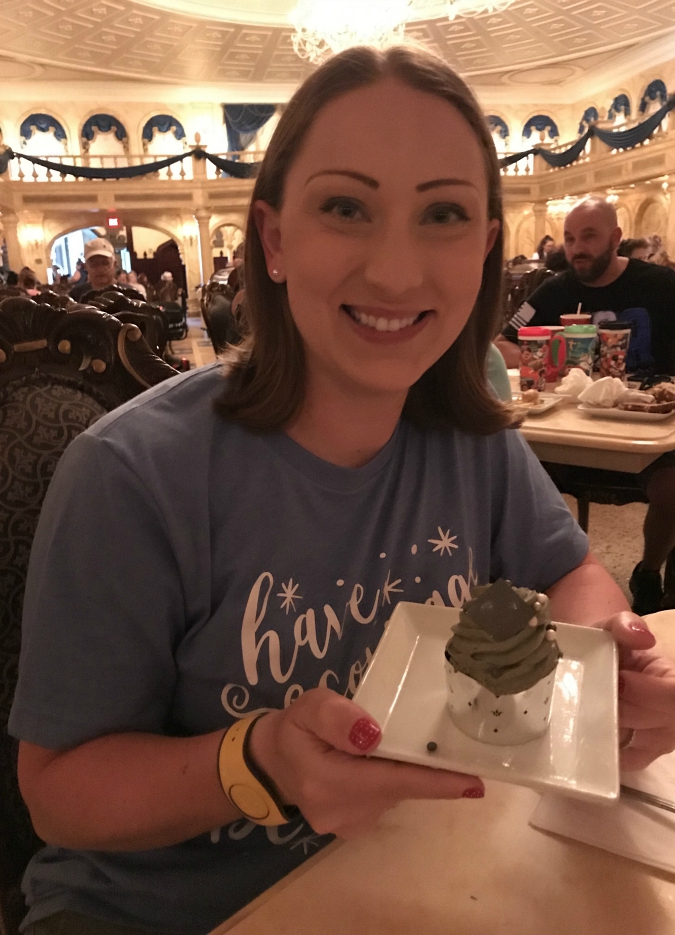 for lunch on our second day in the magic kingdom, we were actually able to snag impossible-to-get reservations for be our guest.  the entire thing is themed like the beast's castle from beauty and the beast.  i had the veggie quiche which came with a salad, ryan hand the croque monsieur sandwich, we shared the potato leek soup (which was vegetarian!), and for dessert had the "grey stuff" cupcake which was great! 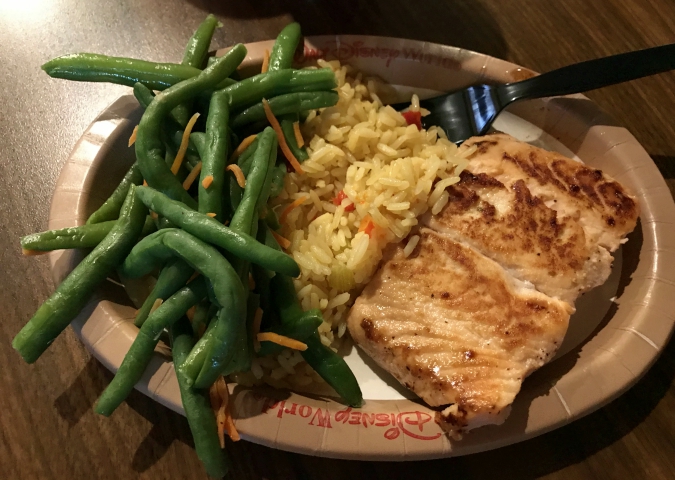 since we had a big lunch at be our guest during our second day in the magic kingdom, we shared a salmon dinner from columbia harbour house.  we ate there during our last disney trip and knew we really liked it. 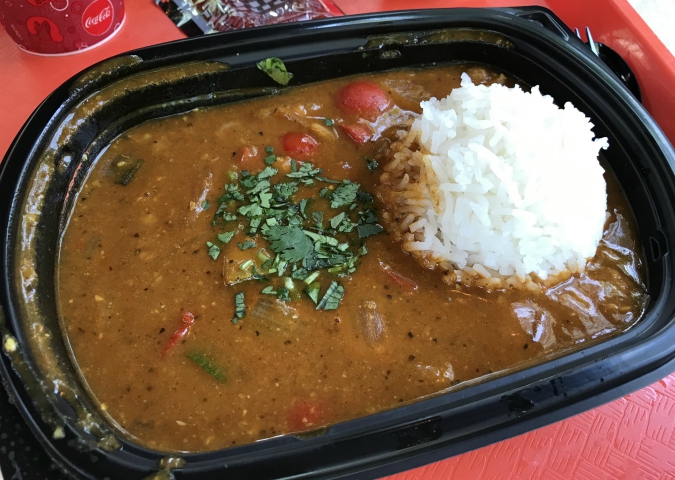 during our day in animal kingdom, we shared the veggie tikka masala for lunch from yak and yeti local foods cafe. it didn't look like much, but it was good! 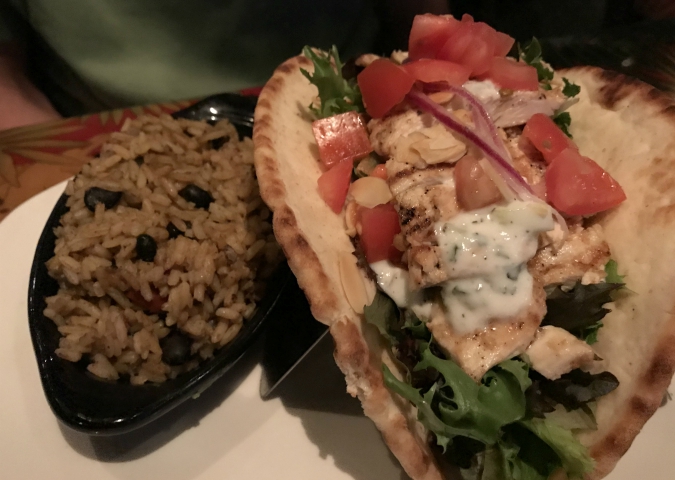 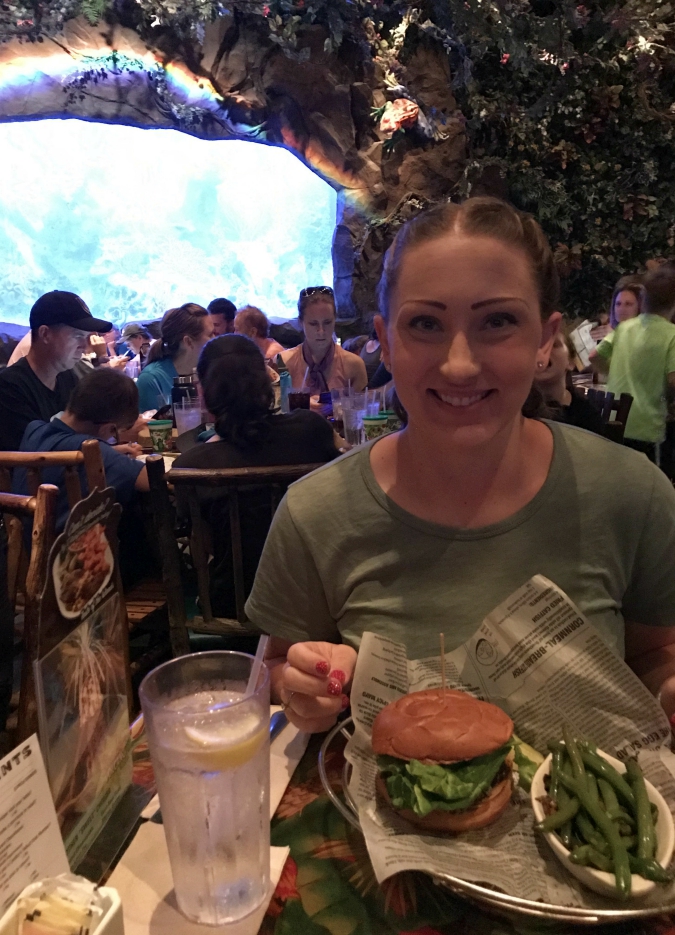 it was very hot and humid in animal kingdom and we needed to find some air conditioning for dinner so we ate at the rainforest cafe.  ryan had the chicken panini and i had the black bean burger. 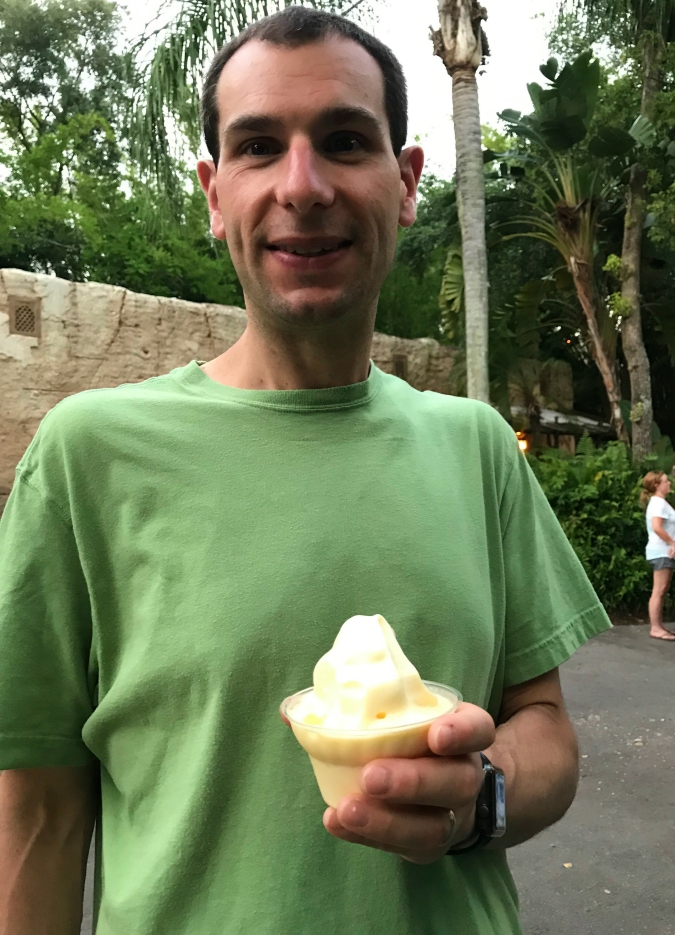 for our last treat, we grabbed a dole whip at tamu tamu refreshments before the night show started at animal kingdom.  you can't visit disney without getting a dole whip!  ryan had been asking for one during our whole trip, so it was only fitting that we got one on our last day!

Oh that food looks so good! I am so hungry right now. I wouldn't mind eating some of it. Good food choices.

Wow, so much food and it all looks delicious!