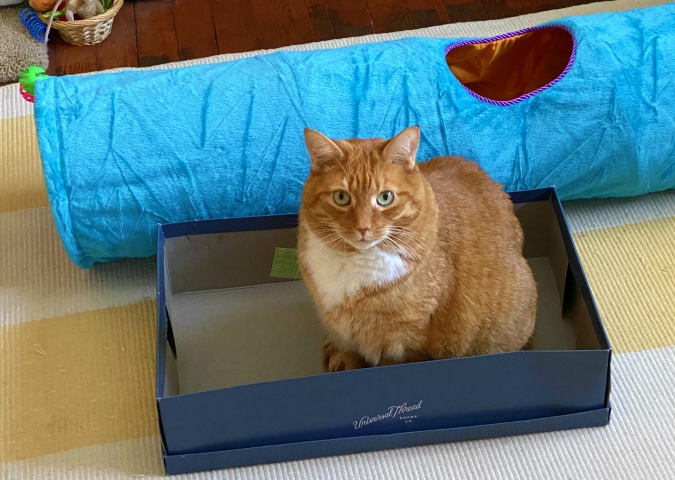 why is it that whenever you come home with a shoe box kittens need to sit in them?  boot boxes are especially fun because they are extra long! 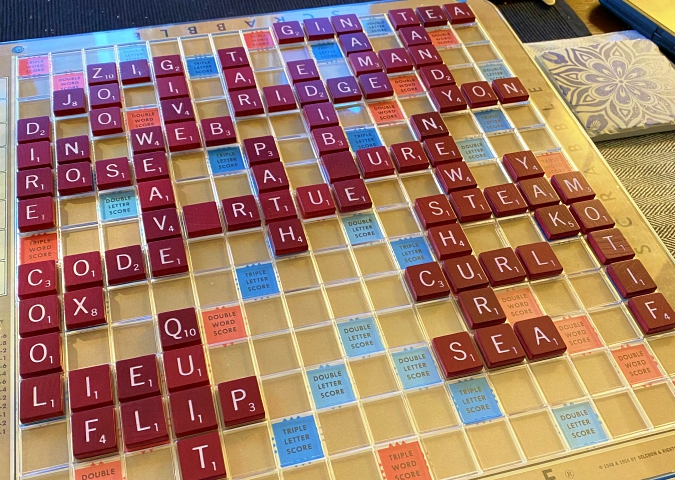 on sunday night we sat down at the dining room table and played two games of scrabble.  it has been absolutely forever since we've had a chance to play and we missed it.  it was so nice and we had a lot of fun. 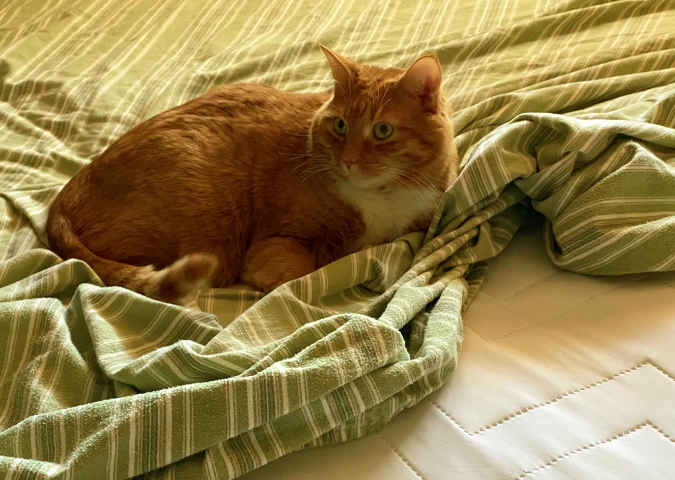 i had some free time on sunday morning so i decided to wash the bedding.  leko always loves helping me make the bed when the sheets come out of the dryer.  he chases them around the bed and plays with them.  he was so into it on sunday that he wore himself out and sat down right in the middle of the half-made bed.  i had to postpone that project and come back to it a little while later when he was done with his nap.  what a cute laundry helper! 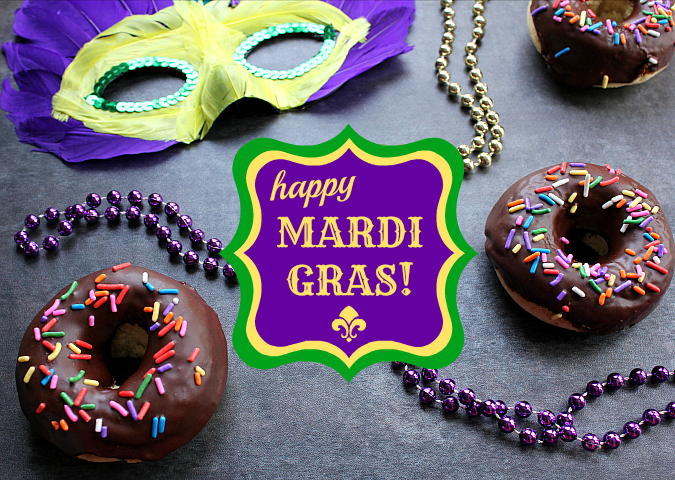 happy mardi gras / happy fat tuesday / happy fasnacht day!  no matter what you call it, it's a great excuse to eat a doughnut today.

"who you gonna call? ghostbusters!" 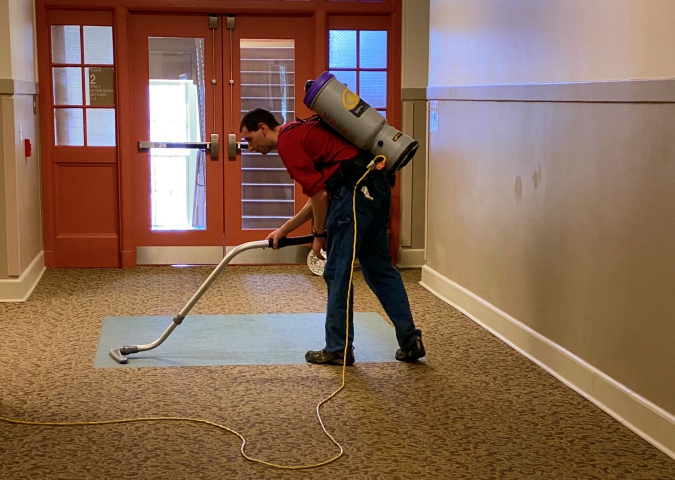 ryan balances a variety of jobs with a wide range of tasks.  one thing he tackled this week was vacuuming our entire building.  i peeked out my office door and the first thing that came to my head was the ghostbusters theme song.  every time i see that vacuum, i can't help but think that it looks like a ghostbusters proton pack.  ha! 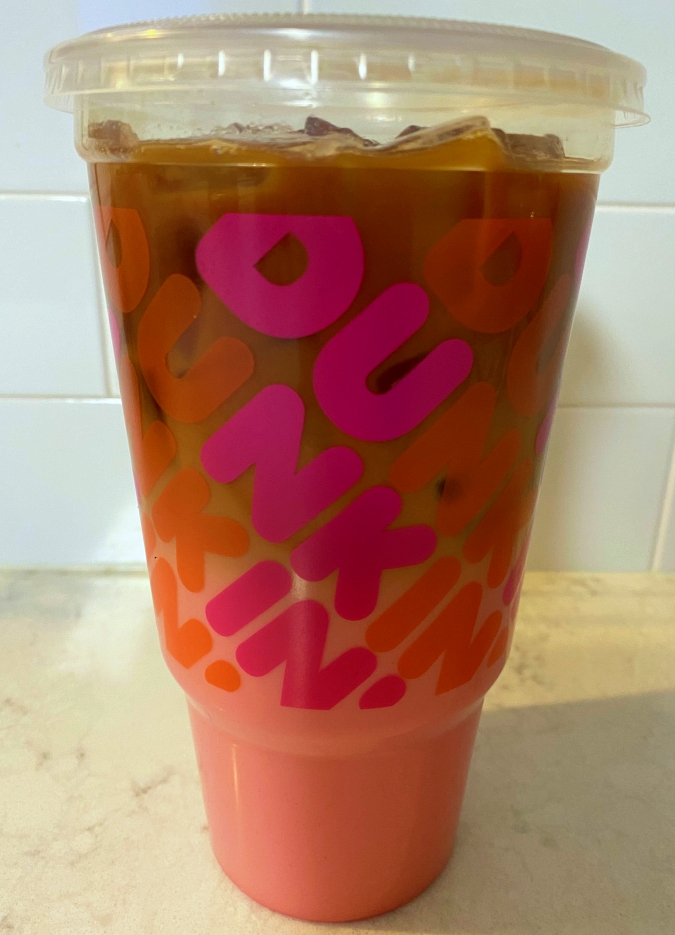 we love getting a coffee from DD as a treat once every so often, and we really love when we earn enough points to get a free coffee!  whenever we build up enough points for a freebie, we always order an iced macchiato to share.  on a recent visit to DD with a free coupon, we saw that they had a special flavor for valentine's day . . . pink velvet.  in the spirit of the holiday, we gave the new flavor a try and were both surprised by how much we loved it!  we still can't figure out exactly what it tastes like (we've narrowed it down to a combination of chocolate, cherry, and almond) but nonetheless, we enjoyed it!  we heard rumors that the pink velvet was really pink, and it actually was pink in our cup which was fun!

surprise, surprise, we're back in the theatre 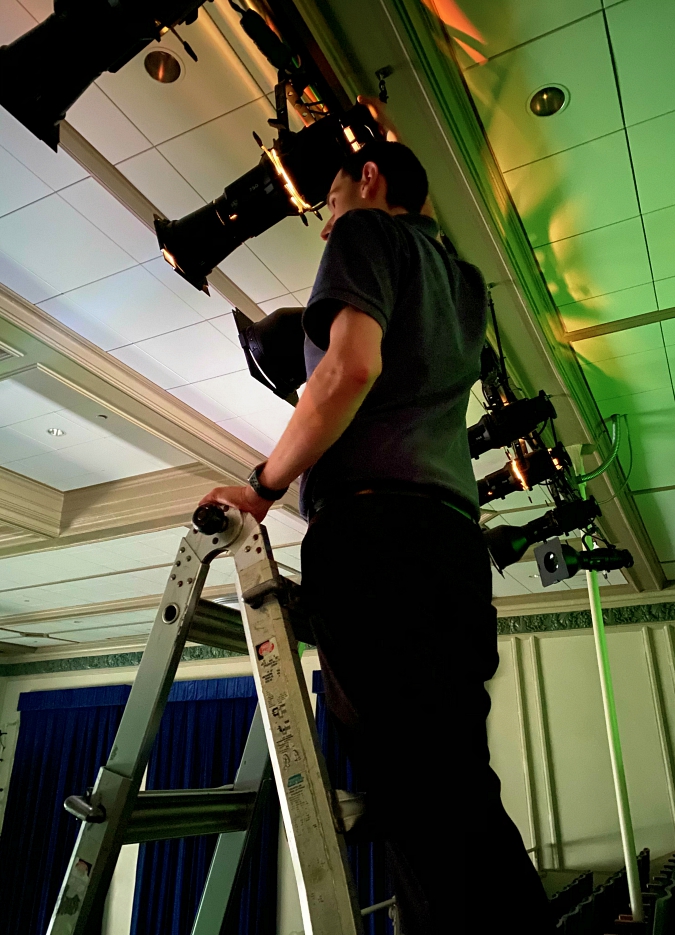 one of my favorite things is when the theatre is quiet and it's just the two of us focusing lights. 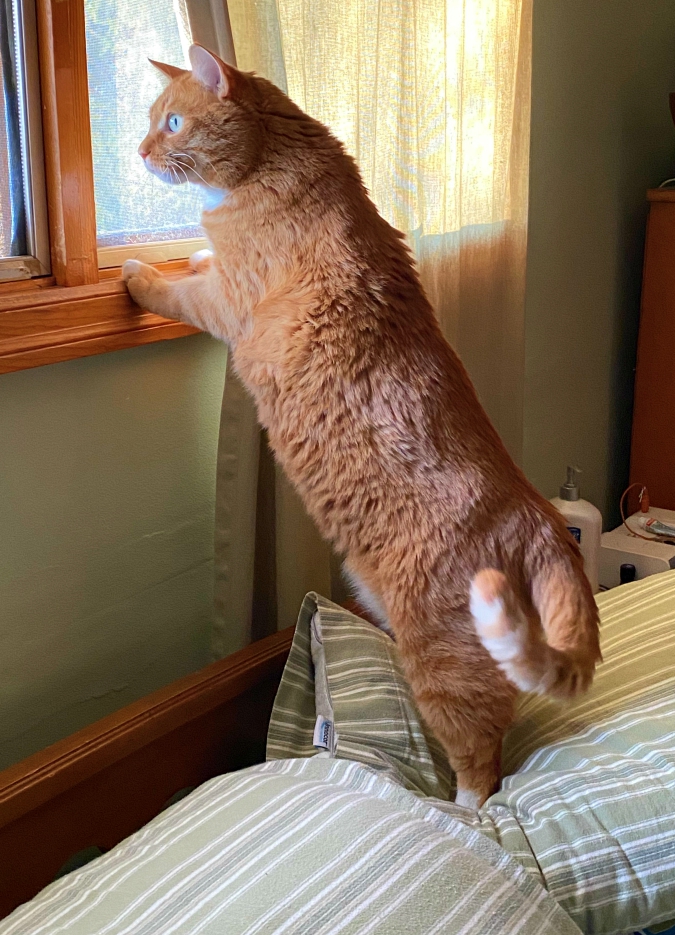 the past few mornings, leko has been enjoying standing on our pillows and keeping watch over his backyard.  someone has to keep all of the squirrels in check!  it is such a cute way to wake up in the morning! 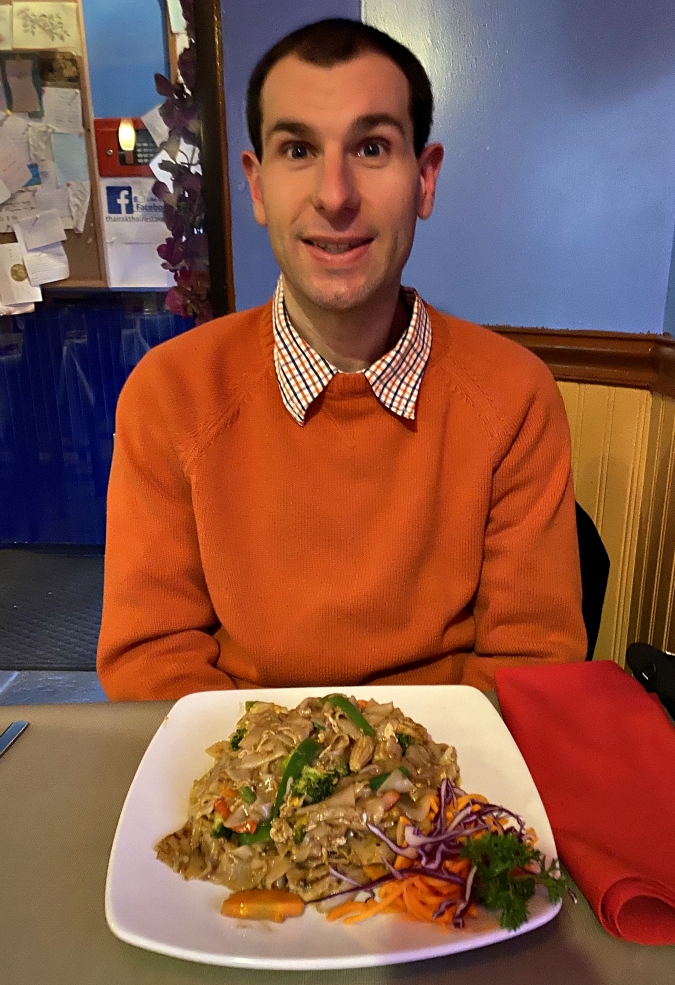 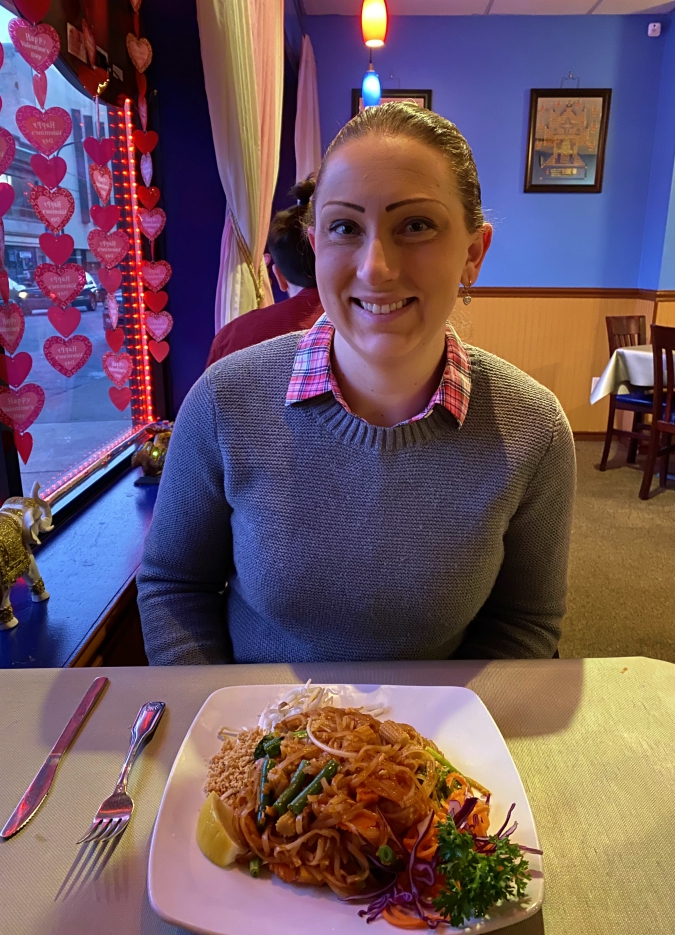 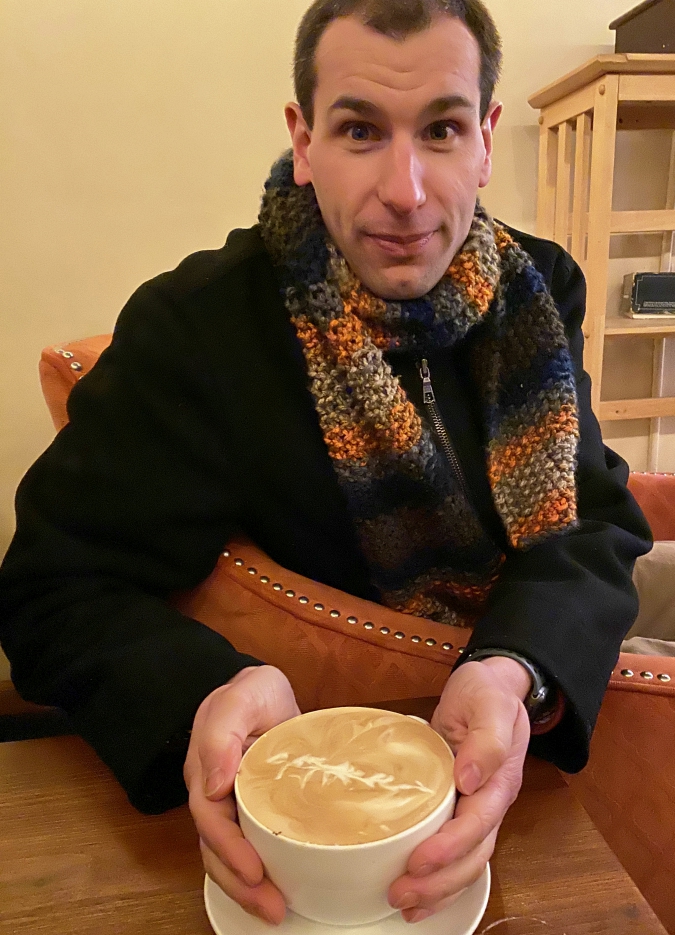 after we worked the load in of the play that goes wrong on friday we had a little bit of free time before the show started.  since it was valentine's day, we were so glad that we had a chance to have dinner together.  we went to a local thai restaurant for dinner and it was so good!  after dinner we stopped by a coffee shop and shared a toasted almond mocha latte to warm us up because the weather was freezing outside!  it was a fun little date for valentine's day! 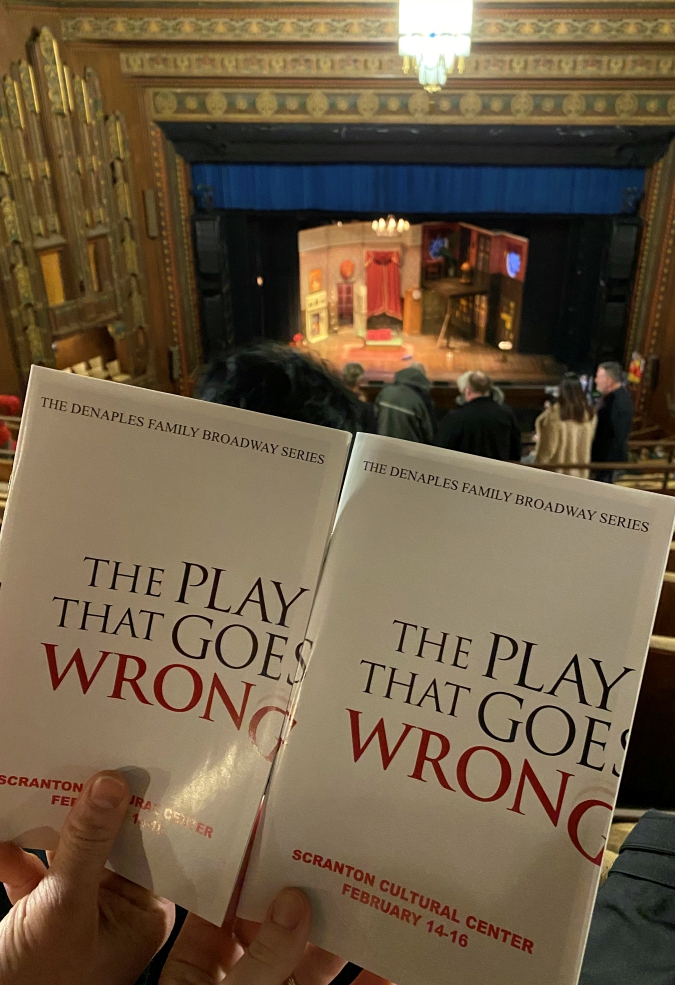 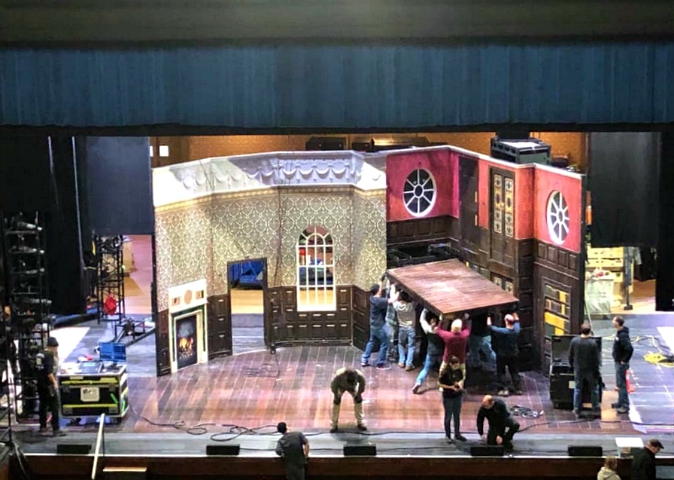 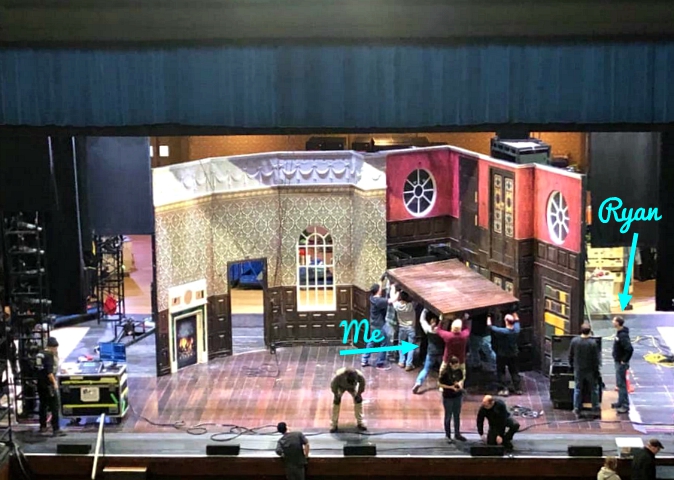 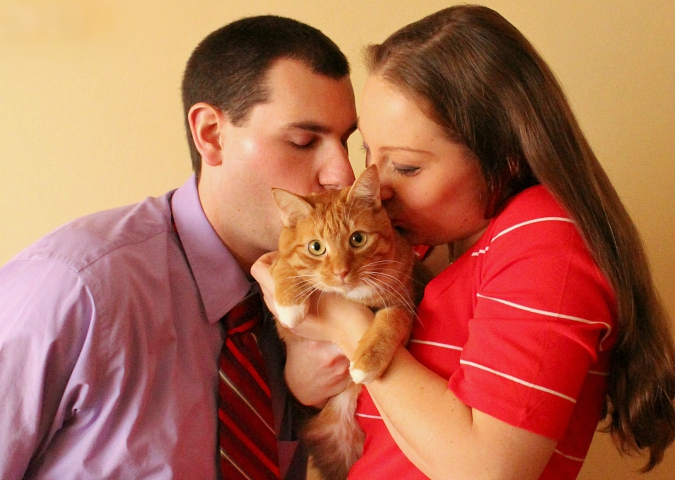 today is valentine's day!  this is one of my favorite pictures taken several years ago on valentine's day.  these two boys are always my valentines every day of the year!

we're both working a show today, so we'll take a raincheck and celebrate valentine's day another day. 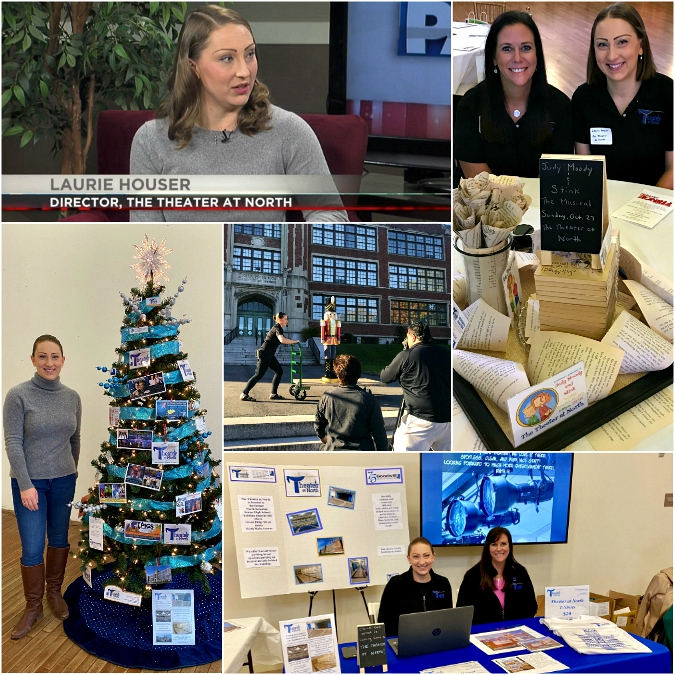 yesterday was my two year work anniversary of working as director of theater operations at the theater.  it's really hard to believe that it has been two entire years since i started this job.  i really do love my job and i'm so grateful to be able to do what i love every day.  here's to many more years! 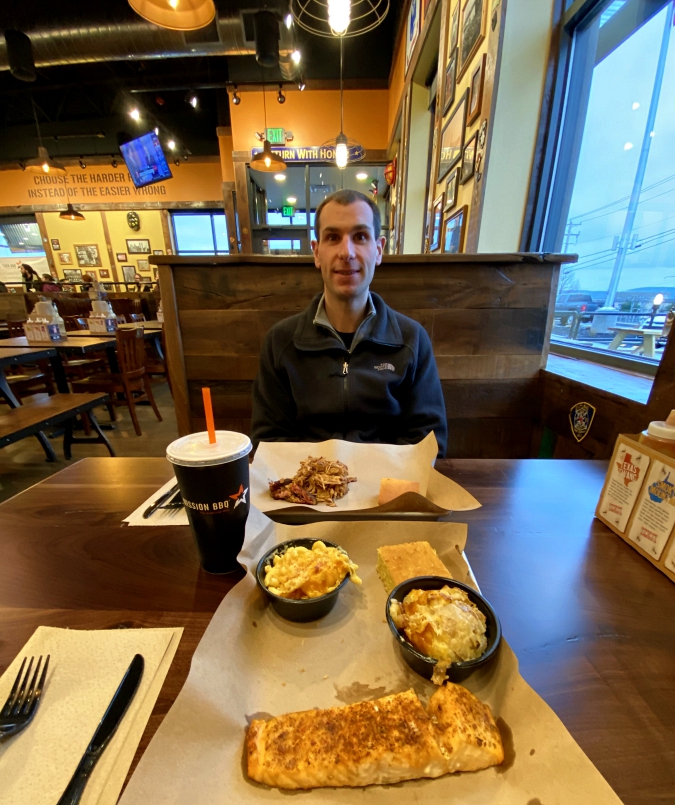 we had to travel for a doctor appointment for ryan's knee monday evening.  it was one of those annoying appointments where the doctor left us sitting the in exam room for 60 minutes before coming in to see us.  call me crazy, but i think running a full hour behind is downright disrespectful to our time!

needless to say, we were starving by the time we got out of there.  we saw that a new restaurant opened up, so we thought we would stop in to give it a try for dinner.  it was called mission bbq and it hit the spot on a cold, dreary weeknight.  i had the salmon and ryan had the pulled pork.  we shared sides of mac-and-cheese, potatoes, and corn bread.  it was a nice little impromptu date night. 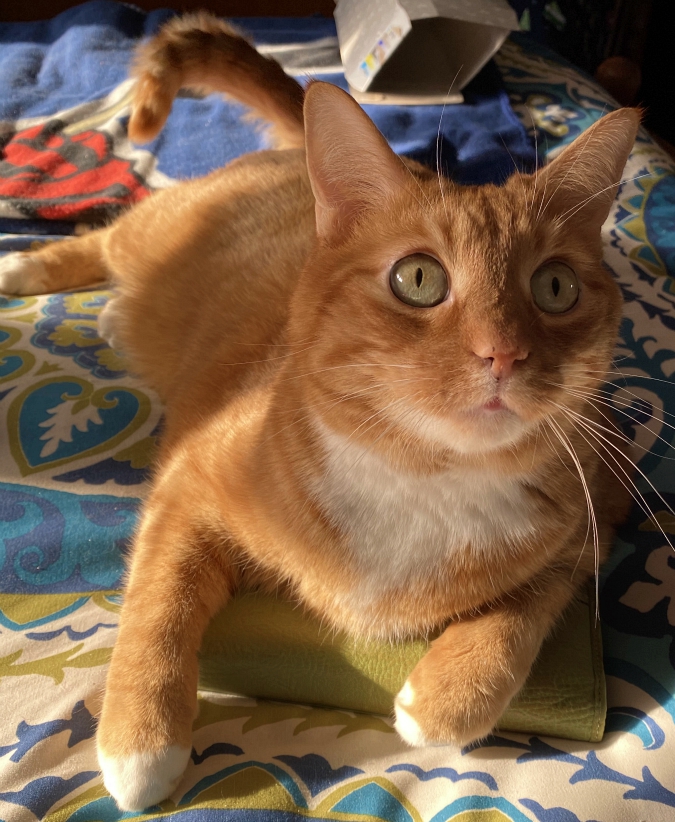 on sunday i set my wallet down on the bed because i was going to take some cash out of it and then put it back in my purse.  before i could do all of that, leko jumped up and sat on it, holding it down.  he was so cute, so i grabbed my phone to snap a picture of him.

when i asked him if he was going to steal my credit card out of my wallet to go order some kitten food on chewy.com, this is the reaction i got . . . 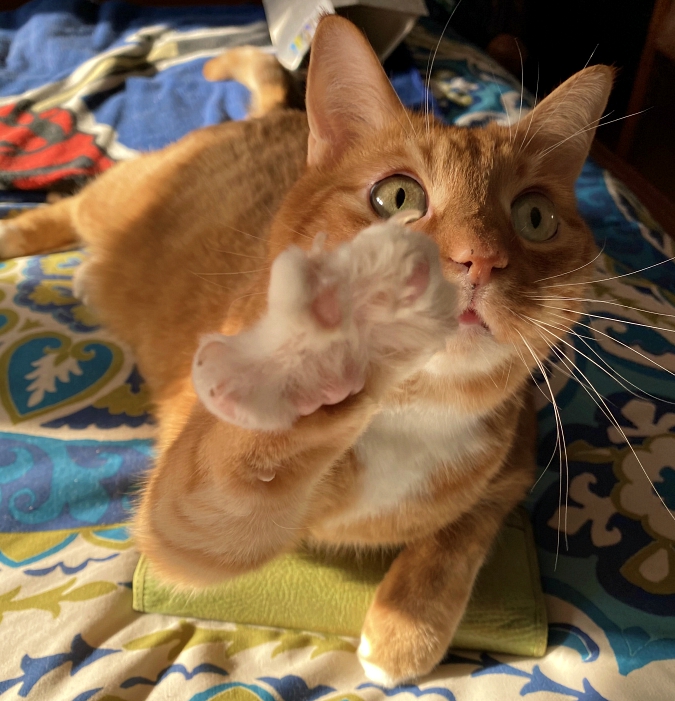 . . .  those claws were supposed to scare me off i think! 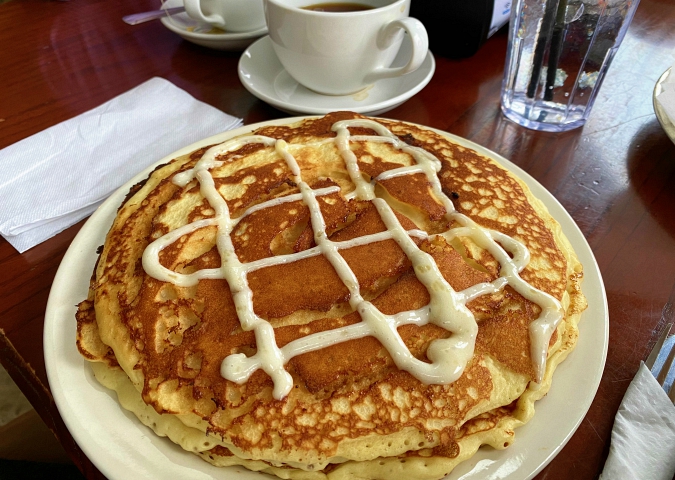 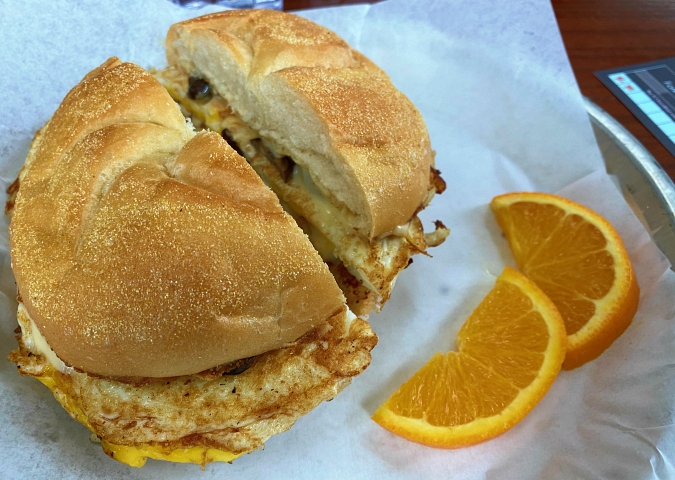 one thing we rarely do is get together with my parents to go out for breakfast.  saturday morning was a rare occasion when we were all available and able to get together for breakfast.  we tried a newly-opened bistro near my parents' house.  we shared cinnamon swirl pancakes (which reminded us so much of the cinnamon swirl pancakes we make at home) and a unique breakfast sandwich which had a potato pancake, eggs, mushrooms, and pepper-jack cheese on a kaiser roll.

it was a delicious breakfast! 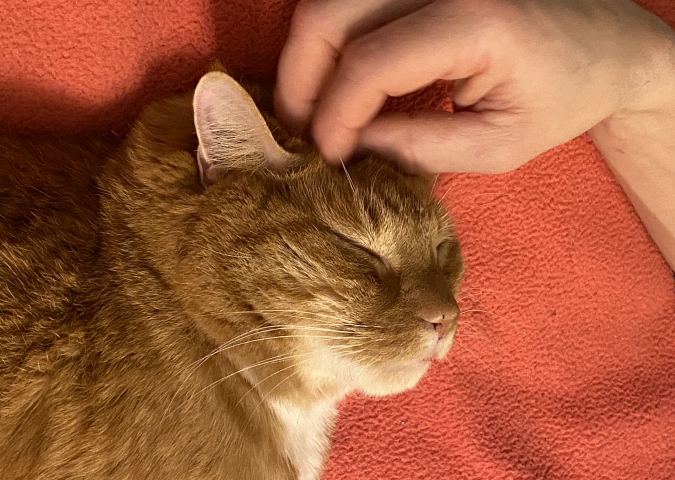 i couldn't get in bed the other night because these two were too busy having a cuddle fest without me!  of course i had to snap a picture.  so cute!

a fun link for the day 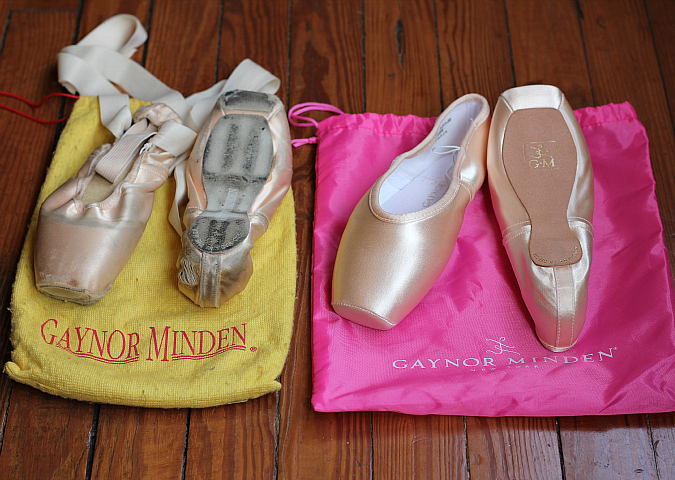 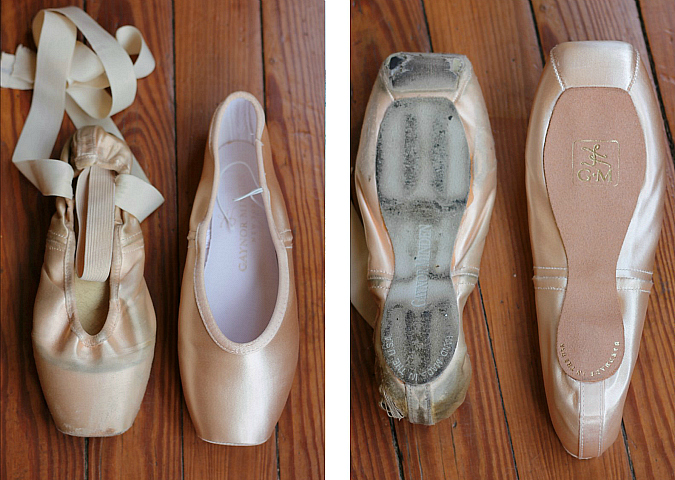 i found these pictures of things worn down over time and found them so interesting.  it somehow reminded me of several years ago when i bought a new pair of pointe shoes and took a side-by-side photo. 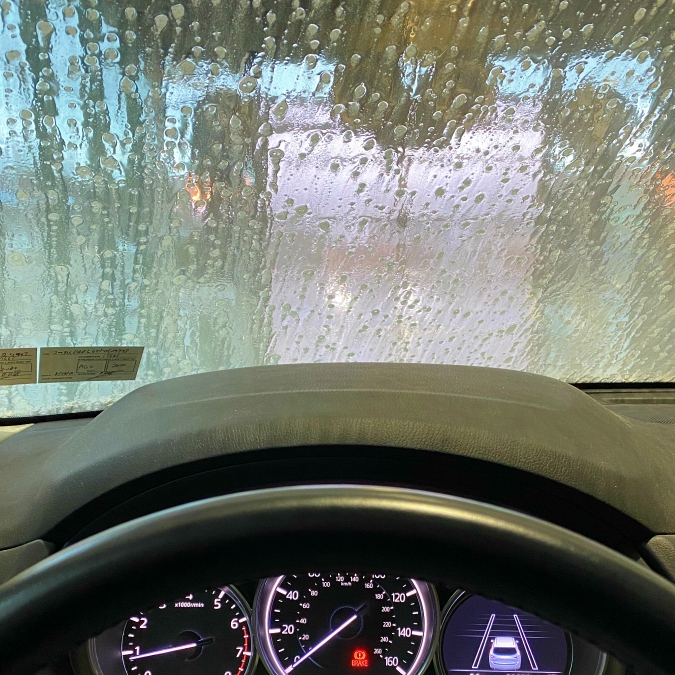 the winter weather and salt solutions on the roads make a mess of our cars.  it was such a nice treat to finally be able to run our cars through the car wash the other day.  i'm happy that i won't have all that salt on my hand each time i open the doors or the trunk for awhile. 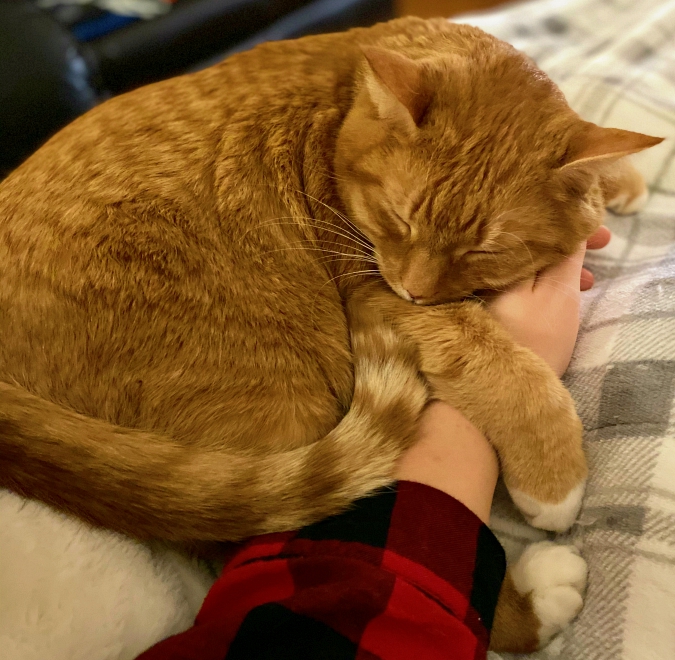 i can't even contain myself when this guy falls asleep on our laps when we sit on the couch.  it's especially extra cute when he grabs ahold of our hands and hugs us! 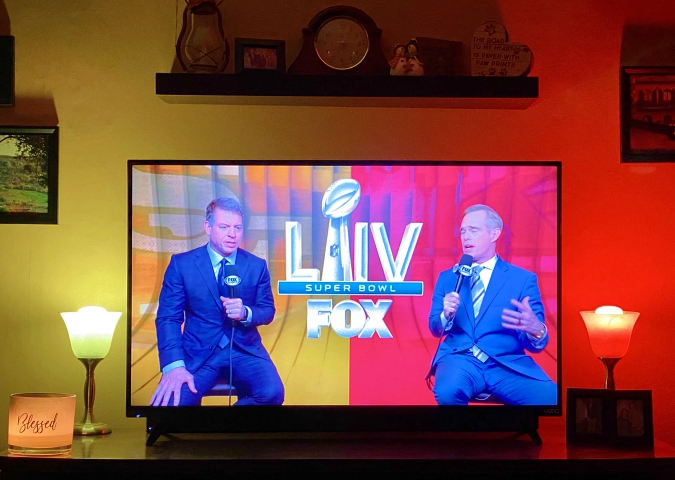 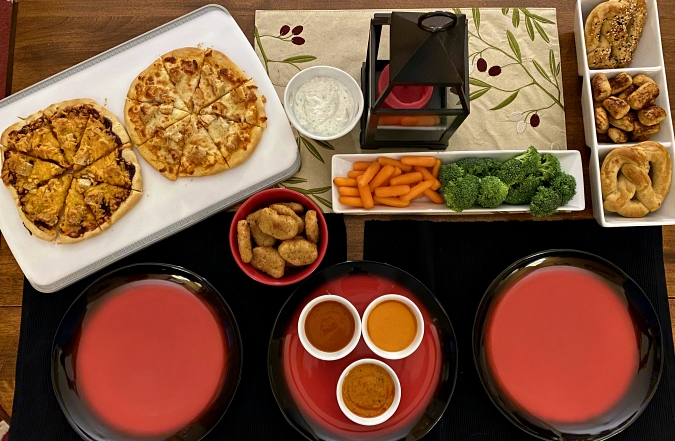 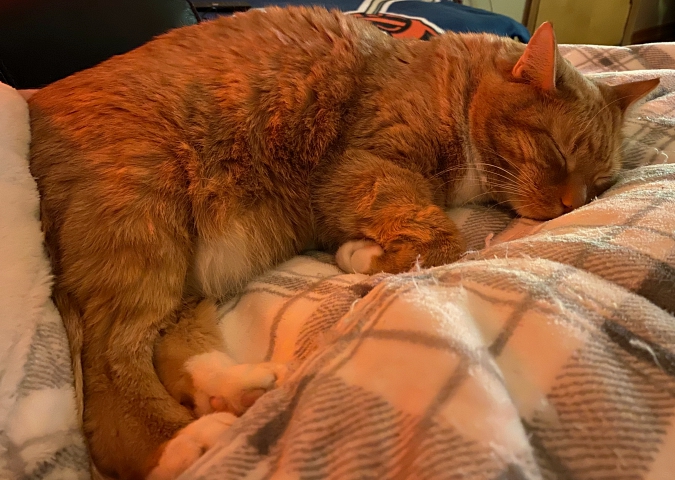 even though we're both not fans of football, we do enjoy sitting down to watch the super bowl each year.  granted, it's mainly for the food, the commercials, and the half-time show.

our favorite tradition is to watch from home in our pjs with leko.  on sunday, we curled up on the couch with some of our favorite treats and our favorite kitten.  we made vegetarian chicken nuggets, homemade mini pizzas, veggies with dip, and homemade soft pretzels.  we both stayed awake for almost all of the game.

this year, my favorite commercial was the ellen alexa commercial.