my week in new york city 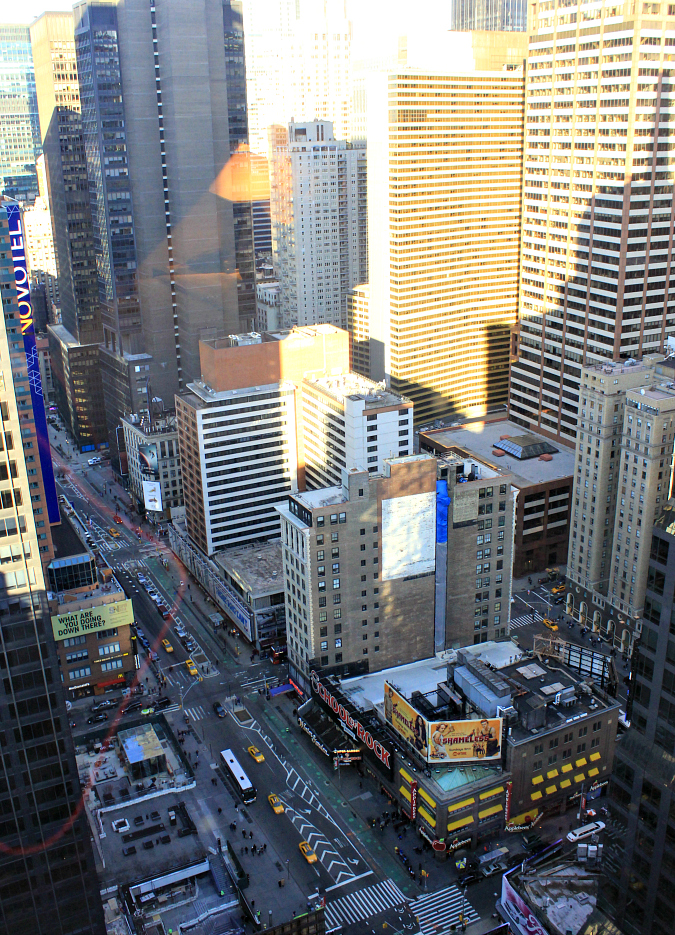 after spending the day with ryan in nyc on saturday, i stayed in the city for several days for a conference for work.  when i first heard that this conference was going to be held in manhattan, i was so excited because i absolutely love nyc!  (of course, that's no secret.)  ryan and i have made countless trips to nyc over the years.  since we live so close to the city, our trips are usually one day or two day trips.  i've never had the opportunity to spend such a long period of time in nyc.  it was great!

i took advantage of every ounce of free time i had between conference sessions, and i packed as much into my time in the city as i possibly could.  i covered a lot of ground and got to spend some time with friends who live in the city too.  i think i pretty much checked off everything on my to-do list and then some!  here are a few pictures from my week in nyc . . . 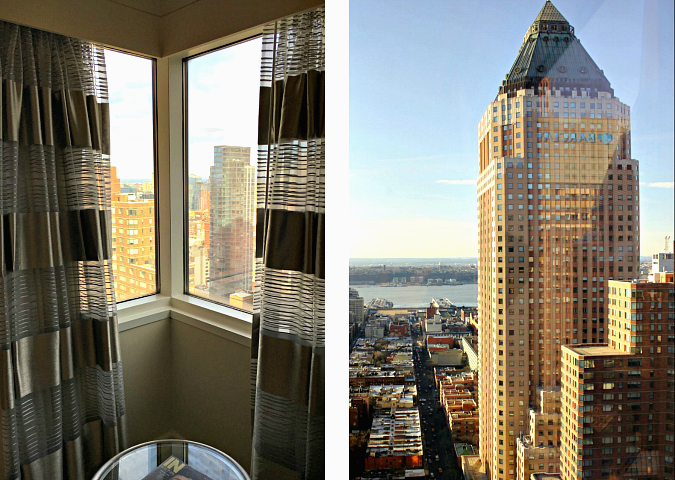 ^i stayed at the crown plaza hotel in the middle of times square since that is where the conference was held.  the view from my room on the 40th floor was amazing.  the first photo in this post is the view out my window looking down on broadway.  you can see the winter garden theatre where school of rock is currently playing.  (i saw cats in the winter garden as a kid with my family, and ryan and i saw mamma mia in that same theatre a few years ago.)  i had a corner window which was great.  in addition to seeing broadway which ran right in front of the hotel, i could also see the ports on the hudson river from my window.  i even got to see two cruise ships docked in port during the week while i was there.  it was really neat to see that view of midtown every day.^ 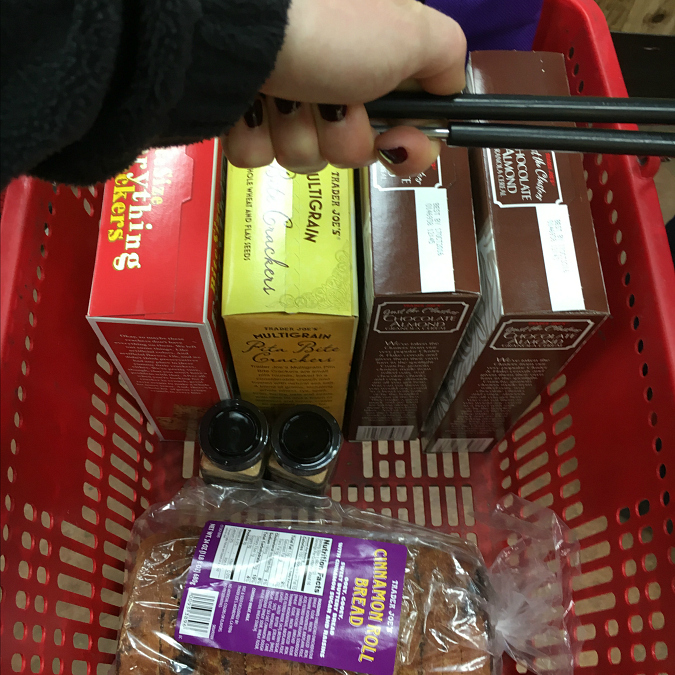 ^i've mentioned countless times how much my family loves trader joe's.  since i was in the city, i used some of my free time one night after the conference to go grocery shopping at the trader joe's on the upper west side.  (i thought ahead and took some reusable grocery bags with me so that i could easily carry my non-perishable groceries home on the bus after my trip.)  grocery shopping on the uws on a sunday evening is always so crazy.  we've done it before, and just like usual it's always bumper-to-bumper people.  it's really an experience, but what can i say, i'm a die-hard trader joe's fan!^ 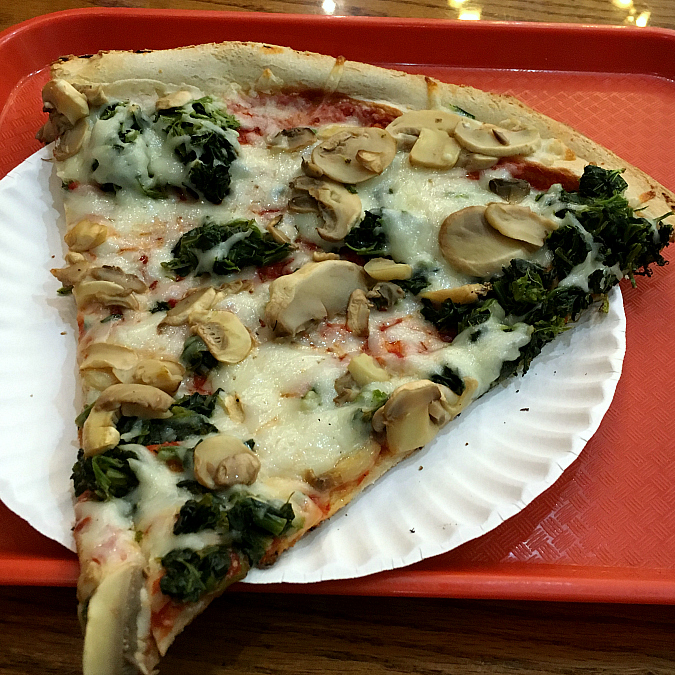 ^i needed a quick lunch one day, so i grabbed a slice of mushroom spinach pizza as i was running somewhere.  it actually turned out to be really good.  this picture doesn't do it justice, it was a humongous slice of pizza!^ 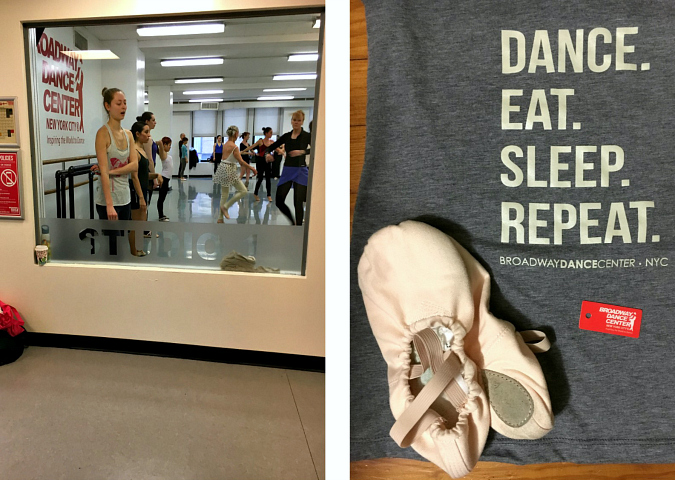 ^ever since i was a little girl, it has been a dream of mine to dance in nyc.  since i knew i was going to be in the city for several days for the conference, i packed my dance clothes and shoes.  when i first got into the city on saturday, the very first thing i did was go straight to broadway dance center and i signed up as a student.  (you know it's official when you get your little red broadway dance center key chain club card!)  after i was signed up, i was able to take dance classes during the week when i had free time.  i did ballet and floor barre classes and it was great!  i was absolutely on cloud 9!  broadway dance center has multiple studios and they are all so gorgeous.  i love that all of the studios have windows looking out into the hallway.  you can sit outside of the studios and watch any class you want through the windows.  pictures really aren't allowed, but i did snap a photo on my phone of one of the ballet classes.  after taking classes at broadway dance center, i bought myself a t-shirt as a souvenir.  it says: "dance. eat. sleep. repeat." which is really pretty accurate for me!^ 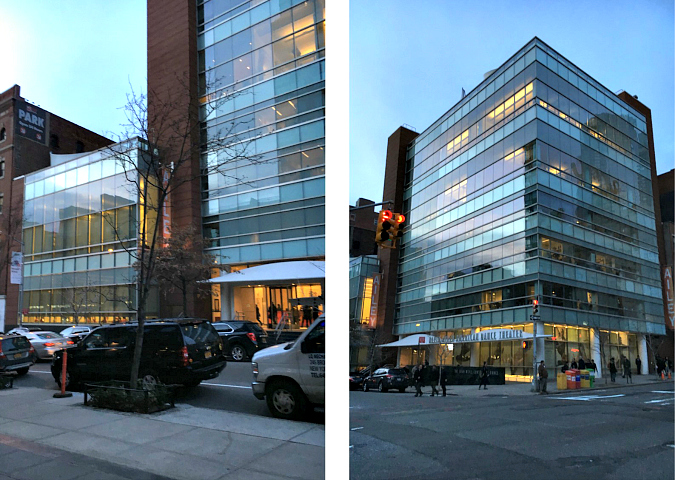 ^in addition to taking dance classes at broadway dance center, i also signed up as a student at alvin ailey for class too!  one of my dance instructors in college introduced me to alvin ailey during my freshman year, and ever since i have been wanting to dance at alvin ailey one day.  i was thrilled to be able to take ballet at alvin ailey while i was in the city last week.  the alvin ailey building is absolutely gorgeous.  it is all glass and sits majestically on the corner of 55th and 9th.  it is especially pretty in the evening when the sun is down and all of the studios are lit up from the inside.  you can stand on the street and watch the dance classes on all six floors.  amazing!  one of my former students actually works at alvin ailey and i got to see her twice while i was in nyc.  the first day i saw her was when i was at alvin ailey for class.  after my class was over, she gave me a tour of the building.  i even got to see the studios where the professional company performs.  it was late at night, so the view from the studio windows of midtown was truly breathtaking!  such an amazing experience.  it was really a dream come true!^ 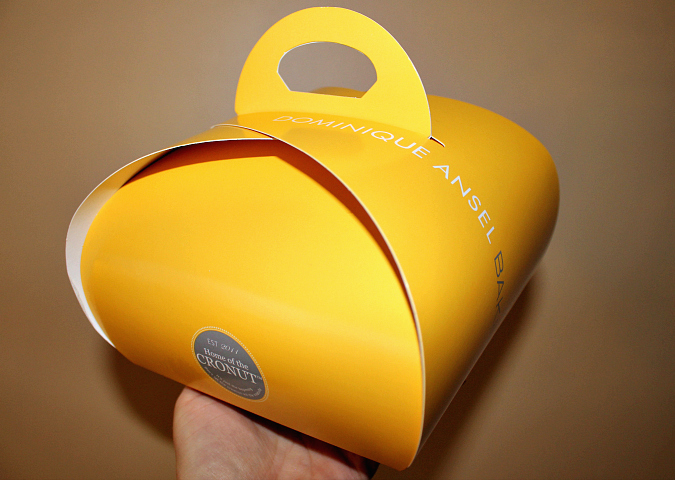 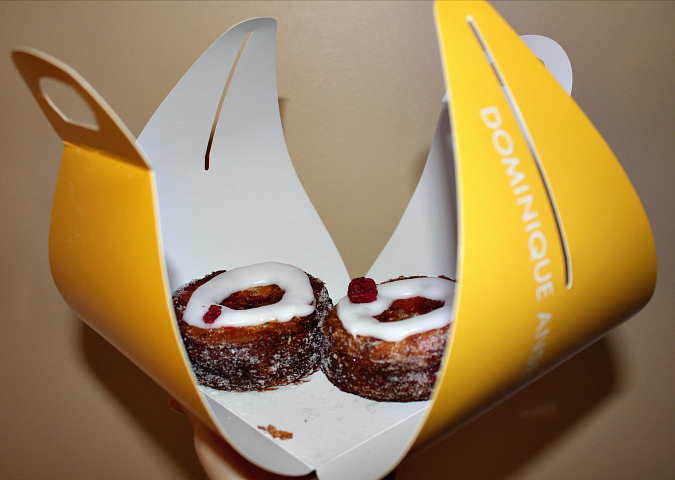 ^whenever i travel for work, i always make sure to bring home something sweet for ryan.  we have been interested in trying cronuts ever since dominique ansel created them in may 2013.  they are insanely popular and have been sold out ever since.  (people actually camped out on the street in front of the bakery over night just to be the first in line in the morning when the bakery opened in order to get a cronut.)  i was never interested in camping out or battling a crazy crowd, so i was thrilled when i found out that you can pre-order cronuts in advance online.  you have to think ahead because the pre-orders sell out two weeks in advance, so i made sure to be in front of my computer the day they went on sale.  i was able to pre-order two cronuts and headed down to the dominique ansel bakery in soho one night after the conference to pick them up.  it was great to be able to just walk right in and pick them up!  i brought them home and ryan and i really enjoyed them.  the flavor for march is raspberry coconut with lime sugar, which was awesome!^ 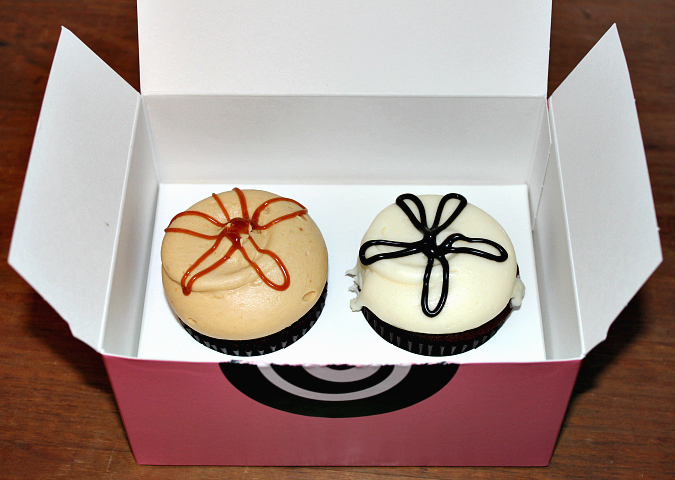 ^the only time we have ever had georgetown cupcakes was when i was in washington, d.c. back in october 2013 for a conference for work.  i picked up two cupcakes on that trip and brought them home for ryan because i had been watching the georgetown cupcake show on tv.  i heard that they opened a location in nyc and it is just right down the street from the dominique ansel bakery.  after i picked up the cronuts, i walked down to georgetown cupcake to pick up two cupcakes to bring home to ryan.  i got chocolate salted caramel and lava fudge.  i hope that hubby of mine knows how spoiled he is!  ;-)  they were really good and we enjoyed them.^ 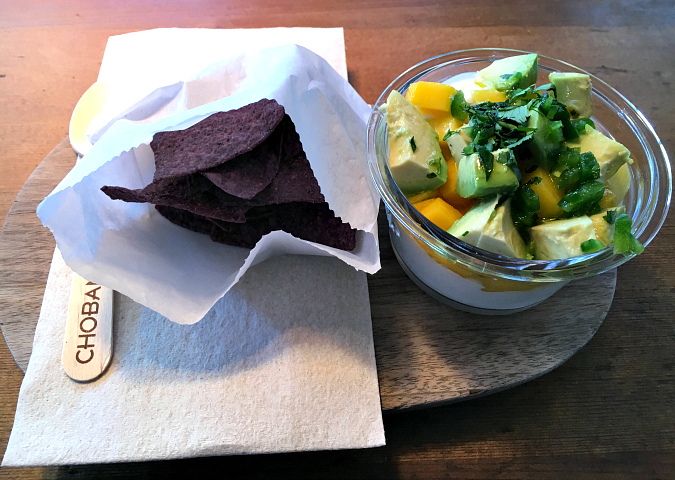 ^while i was in soho, i just could not pass up the opportunity to stop at the chobani cafe.  i am a huge chobani fan and i have collaborated with chobani a few times on my blog, so i was excited to check out the chobani cafe.  i got one of the savory creations: mango, avocado, jalapeños, extra virgin olive oil, sea salt, fresh cilantro, and lime juice, served with blue corn tortilla chips.  oh my goodness, it was awesome!  i would have never thought of putting those ingredients together on top of yogurt.  i can't wait to make that combination at home!  their glass chobani cups are so cute, i bought two to bring home with me for when ryan and i enjoy our chobani yogurt at home.  (we've already used them several times since i've been home!)^ 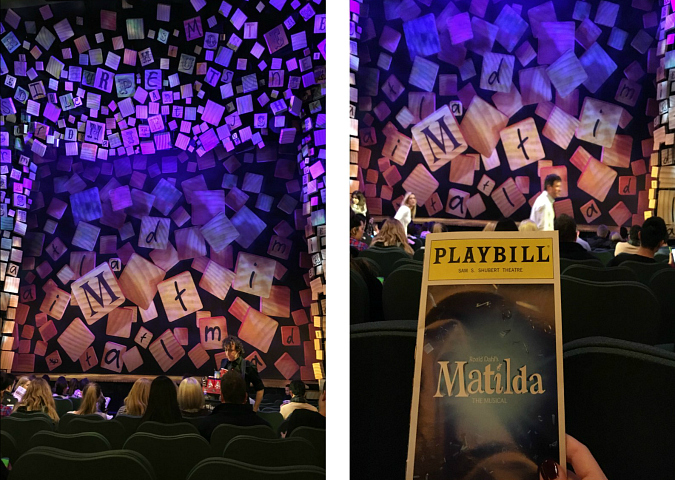 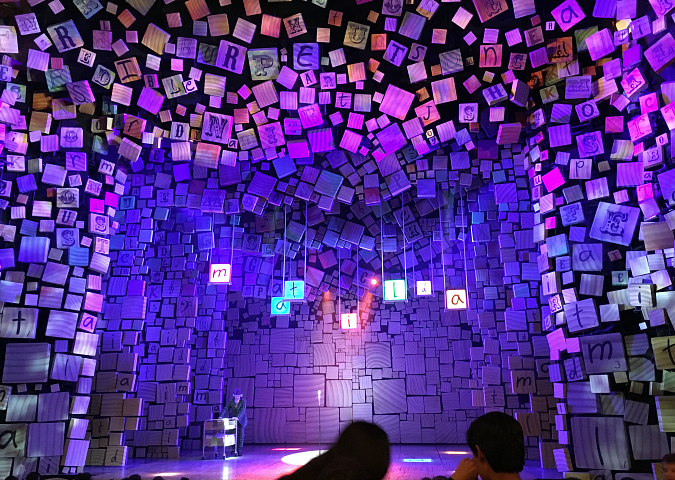 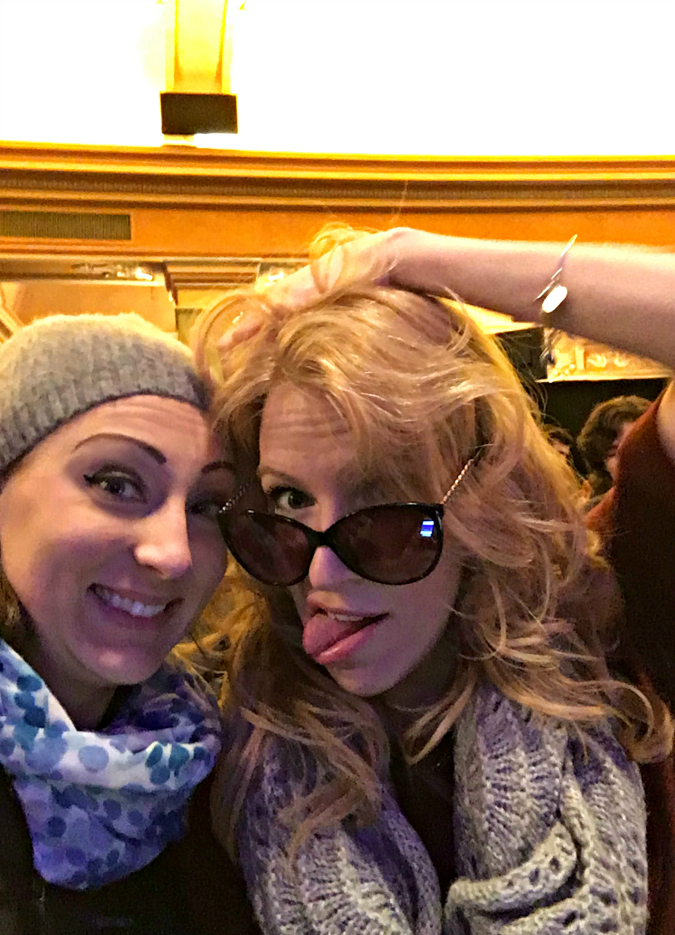 ^on my last night in nyc, i got a call from my mom who said that one of her friends had two extra tickets to matilda on broadway for that night.  i didn't have any plans for the night other than meeting up with my friend erin from college who lives in the city, so her and i both jumped on the chance to see matilda for free!  the seats were awesome, you can't beat center orchestra!  we absolutely loved the show and we couldn't get over how intricate the set was, it was completely unreal.  after the show erin and i grabbed a slice of pizza at two boots in hell's kitchen and while we were there, christopher sieber who plays the roll of miss trunchbull in matilda walked into the pizzeria.  he was absolutely our favorite actor in the show, so we were both in awe to see him.  i'm telling you, you just never know who you will run into in nyc!^

Love the saying on the shirt and what a treat to be in a NYC dance class. The boxes that the cronuts came in is awesome. Now I know what you mean about the curtains for Matilda, fantastic. Love the picture of you an Erin. I do not think you could have packed any more into you days.

I'm glad you had such a good time in the city; you sure packed a lot into a few days!