what we ate on the las vegas strip 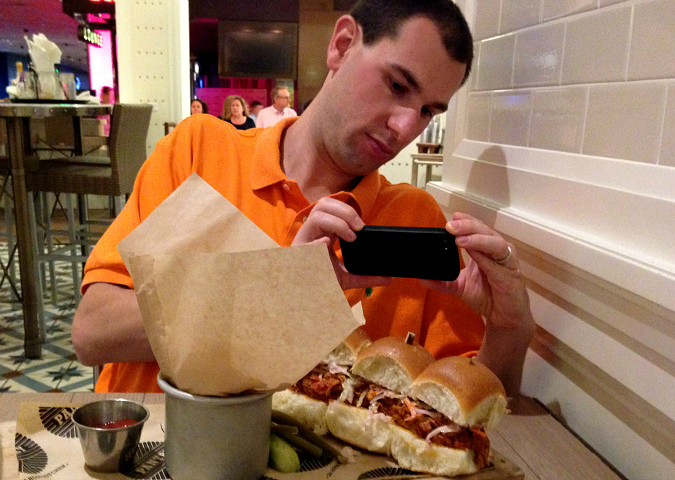 if you made it through this entire week full of vegas photos, i'm impressed.  kudos to you.  i'm not even going to tell you how much weight i gained while we were in vegas.  i was hoping that all of the walking we did would balance out all of the amazing food that we ate, but it just didn't seem to turn out that way.  regardless, we did have some great meals in vegas, and since we're food lovers, i give to you an entire post dedicated to what we ate in vegas . . . 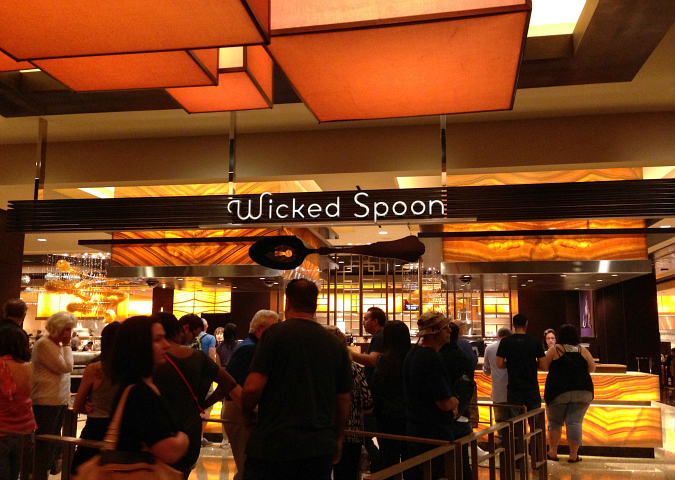 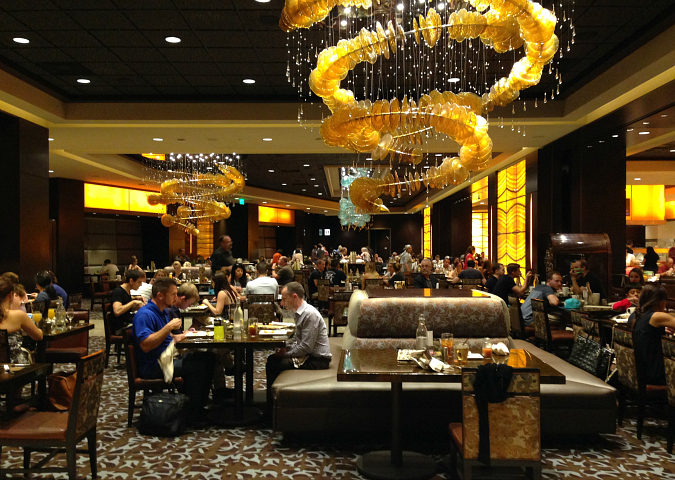 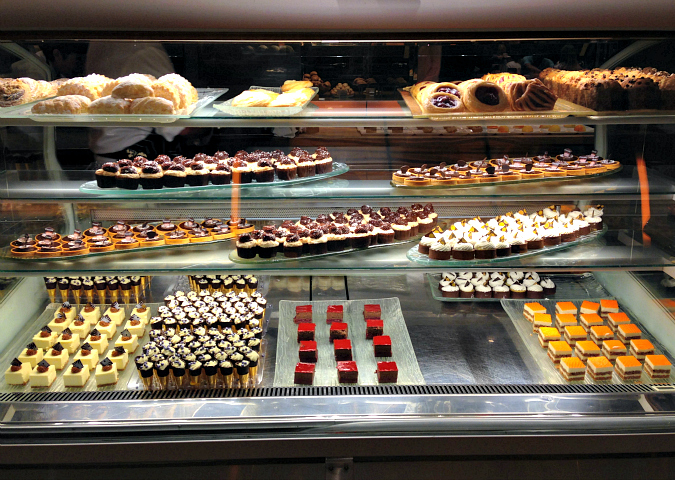 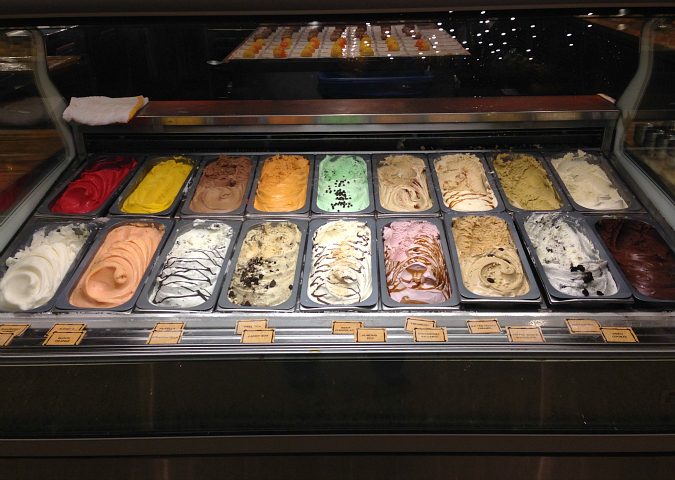 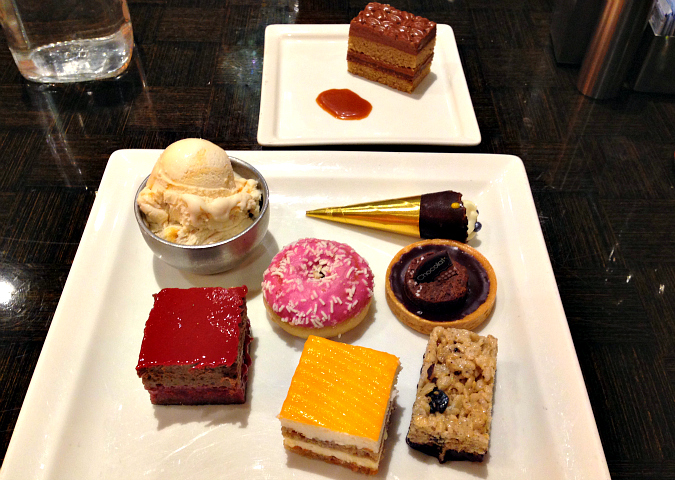 when i think of food in las vegas, the first thing that comes to mind is a buffet.  vegas is known for elaborate and over-the-top buffets, and if you are in vegas you have to eat at a buffet at least once.  when it comes to the vegas buffets, you have to play your cards right to get a good deal.  many of the buffets are ridiculously expensive (and this is coming from two people who regularly eat in nyc).

in our opinion, the best time to hit up a buffet is during lunch because the prices skyrocket during the dinner hours (often with the very same food offered but with added alcohol).  before heading to vegas we did a little research to find out which buffets were rated the best.  topping every single list was the wicked spoon buffet in the cosmopolitan hotel.  if we were only going to get a chance to eat a one buffet, we wanted it to be the wicked spoon.  we were tired, jet lagged, and starving when our plane landed in vegas.  so soon as we dropped off our luggage at the hotel, the very first thing we did was head for lunch (which was actually the brunch buffet) at the wicked spoon.  the options were endless (even for a picky vegetarian).  it was my favorite buffet that we ate at because the food was excellent, and the presentation was great (i mean, how cute is that mini chinese food take-out box and that mini fryer basket?!).  the dessert selection was unreal and there was even an entire gelato section!  let me tell you, it was worth the exorbitant price.  we would definitely recommend the wicked spoon as a great vegas buffet.  (ps: the only beverages included were water, coffee, and tea.) 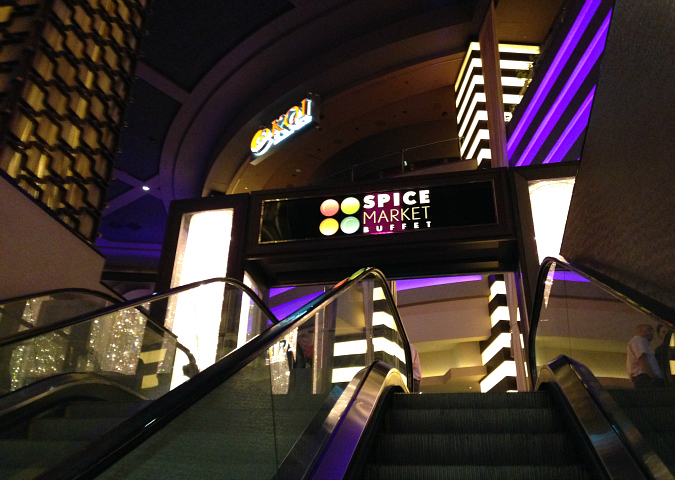 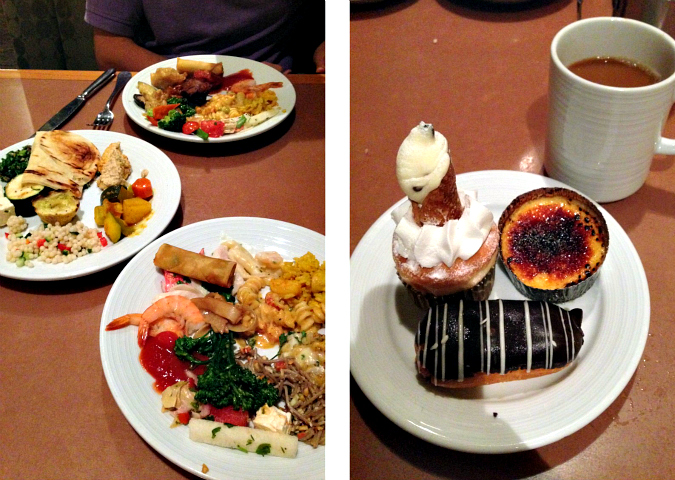 we didn't plan on eating at multiple buffets, but we quickly found out that the food prices in vegas were crazy expensive and the buffets actually turned out to be the best "bang for your buck."  we knew that the spice market buffet in planet hollywood had great ratings, so we ate there for dinner one night.  even with dinner pricing it was still a great deal.  the spice market buffet is set up "taste-of-the-nations" style, and we loved all of the ethnic options.  they had a great selection of seafood.  we were also surprised to see that they included non-alcoholic drinks in the price of the buffet. 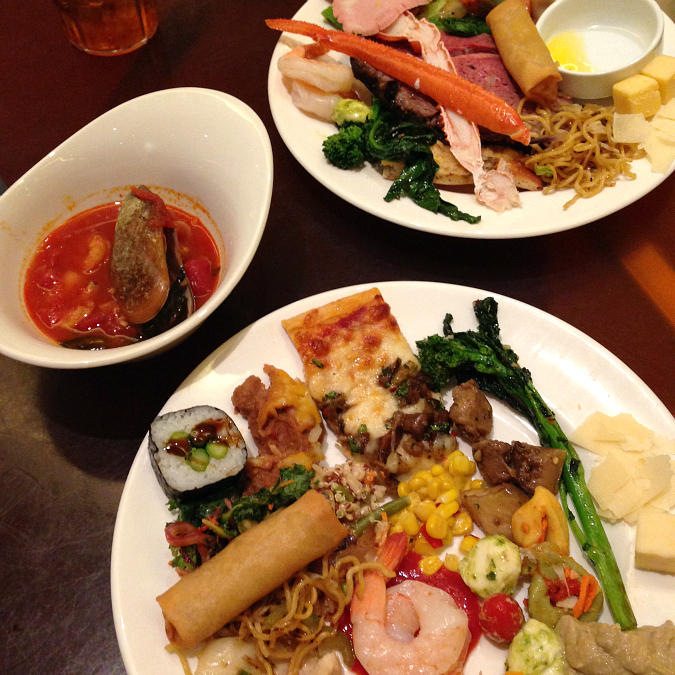 the third buffet we ate at was the cravings buffet in the mirage.  we headed there for a very late dinner on our last night in vegas after going to the top of the eiffel tower.  there were a ton of options, including a chef's station where someone would make dishes fresh in front of you.  we don't drink, but this buffet included all drinks (even alcohol) and it was the least expensive buffet we tried. 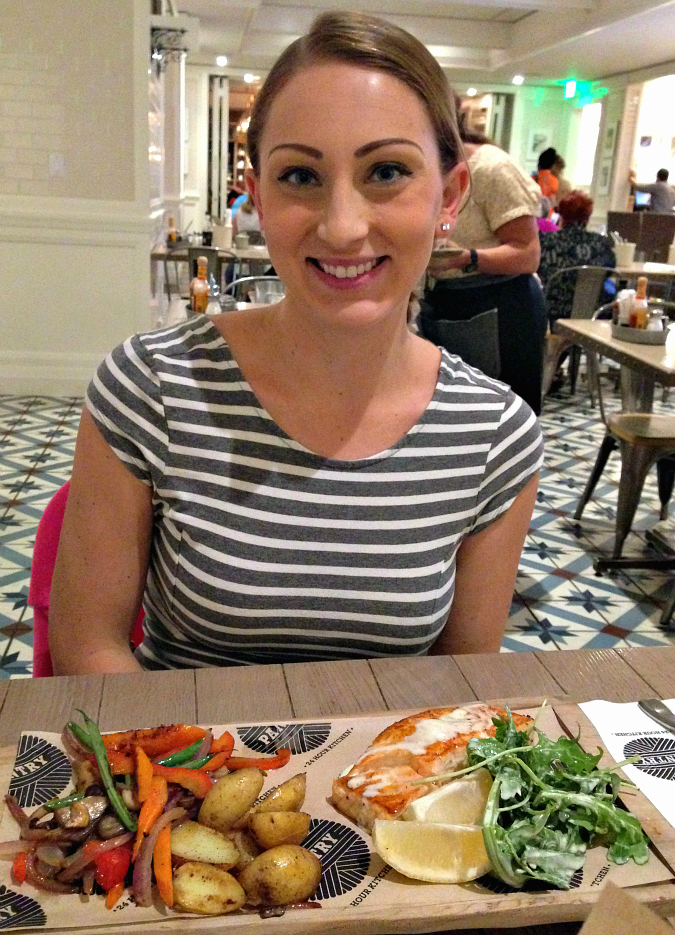 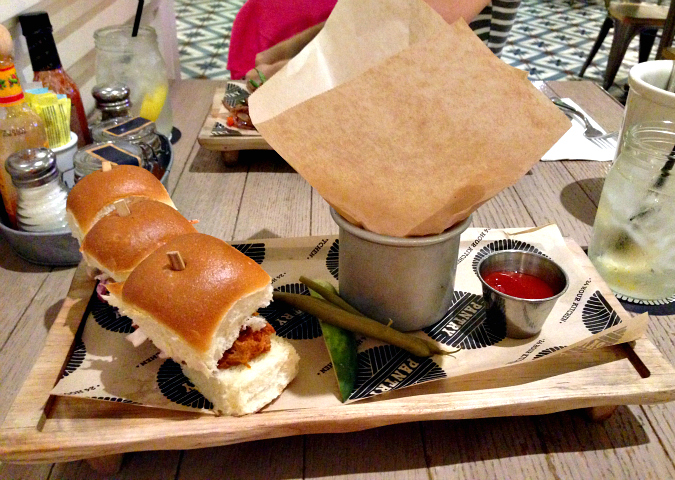 in addition to buffets, we also ate at several regular restaurants.  we had dinner at the pantry in the mirage hotel before seeing the cirque du soleil beatle's love show.  it's a great spot for a quick meal, and they have really reasonable prices.  it's also open 24 hours too!  i had a great salmon dish and ryan had pulled pork sliders. 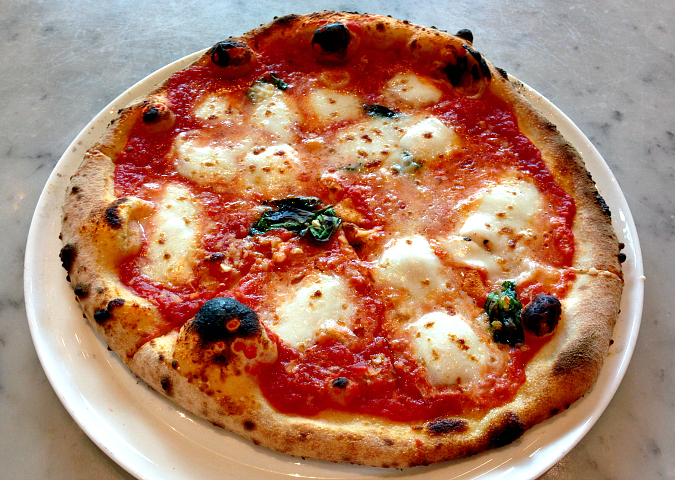 for a really quick lunch, we stopped in the 800 degrees neapolitan pizzeria outside of the monte carlo hotel.  we are huge fans of this style of pizza, and i'm still thinking about how good that pizza was.  i felt like i was in brooklyn!  old-world italian pizza is made with fresh ingredients and baked right in front of you in just minutes.  yum! 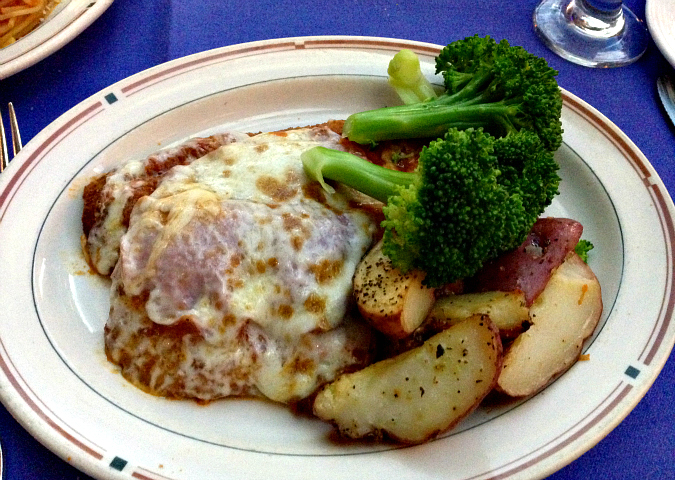 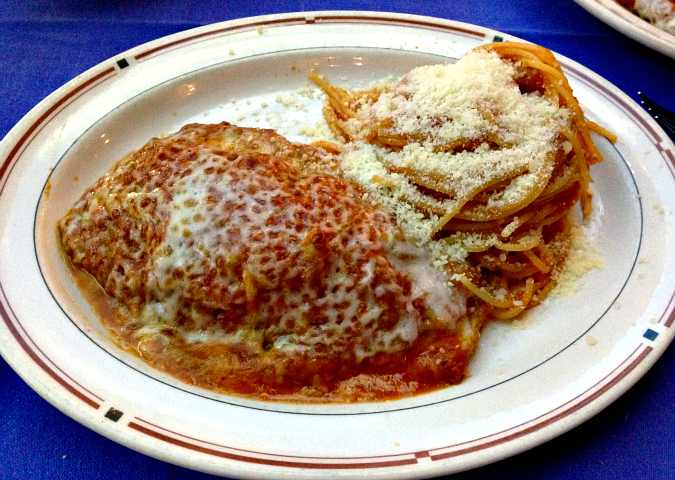 we sat down for an italian dinner at tintoretto's italian restaurant in the venetian one night.  what i really liked about this restaurant was that we were able to sit "outside" in the venetian.  technically, we were inside the hotel, but we were seated in a little section outside the front of the restaurant made to look like outdoor dining.  since the inside of the venetian is themed to look like the outside of venice, i really felt like we were sitting outside (just minus any pesky bugs or loud traffic noises).  the service was great and the food was awesome.  ryan had chicken and i had eggplant parm.  we actually had leftovers which we took back to our hotel and enjoyed for lunch the next day. 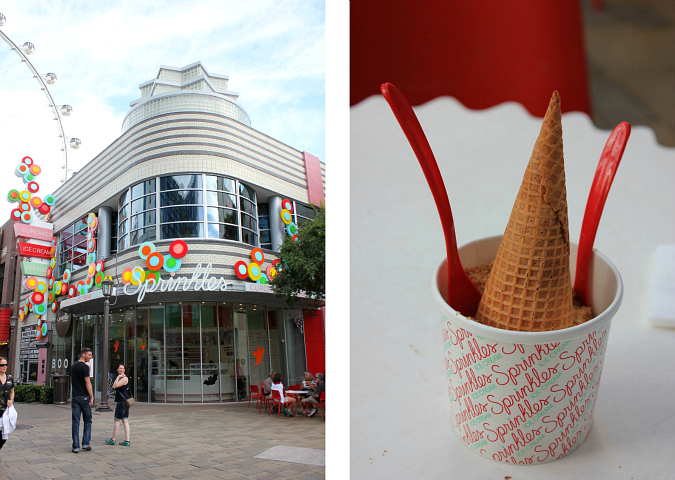 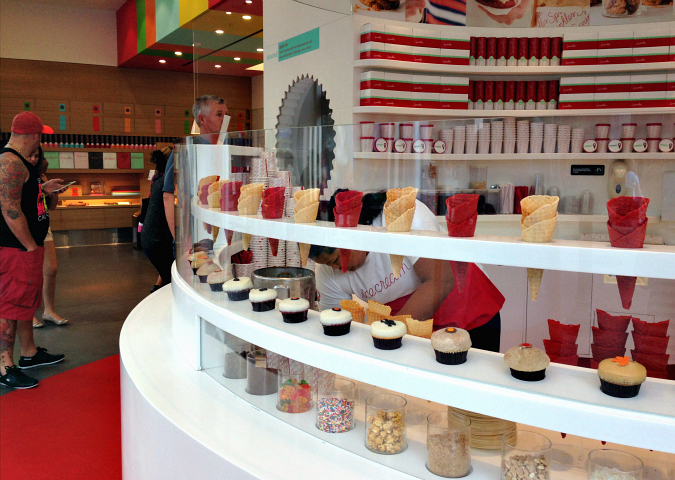 after riding on the high roller observation wheel, we popped into sprinkles ice cream on the LINQ promenade for a mid-afternoon treat.  we've enjoyed sprinkles cupcakes before (in washington, d.c. and in nyc) but we have never had their ice cream.  we shared a scoop of the flavor of the month which was apple pie, topped with graham cracker crumbles and a cone.  it was the perfect treat. 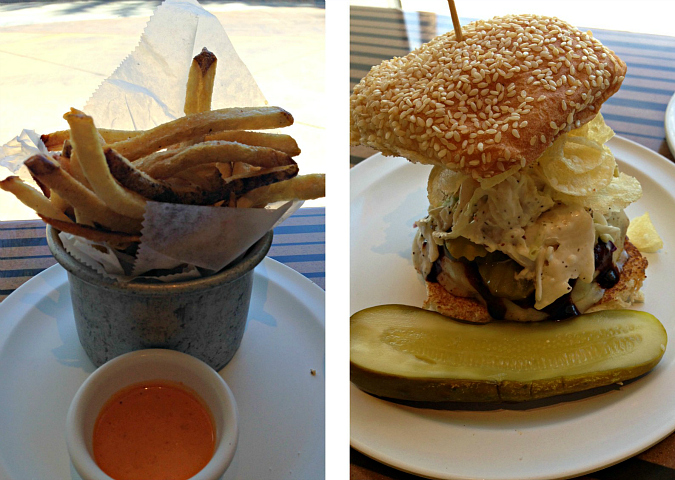 ryan had to grab lunch on his own one day while i was tied up at the conference, so he headed over to bobby's burger palace for a burger and fries.  he was excited to eat at one of bobby flay's restaurants and he really enjoyed his lunch! 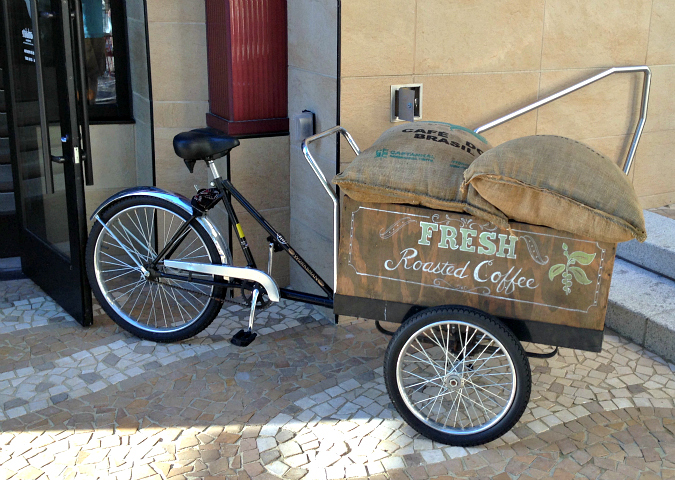 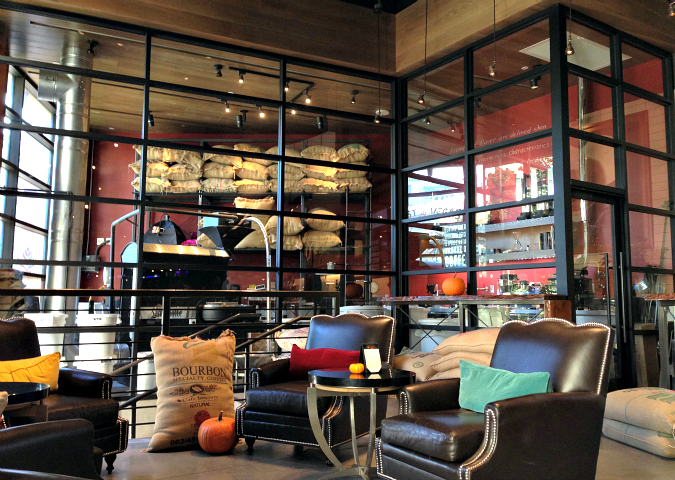 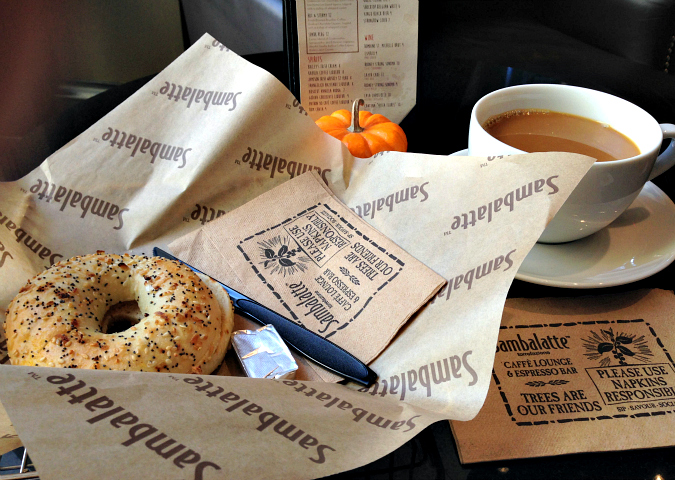 there were a few mornings when ryan ventured off for breakfast on his own when i ate at the conference.  he found sambalatte which was a super cute coffee shop on the strip.  he spent a leisurely morning in there with a cup of coffee and a bagel, and he really liked it.  on another morning, he also grabbed breakfast at blondies sports bar and grill while i was at the conference. 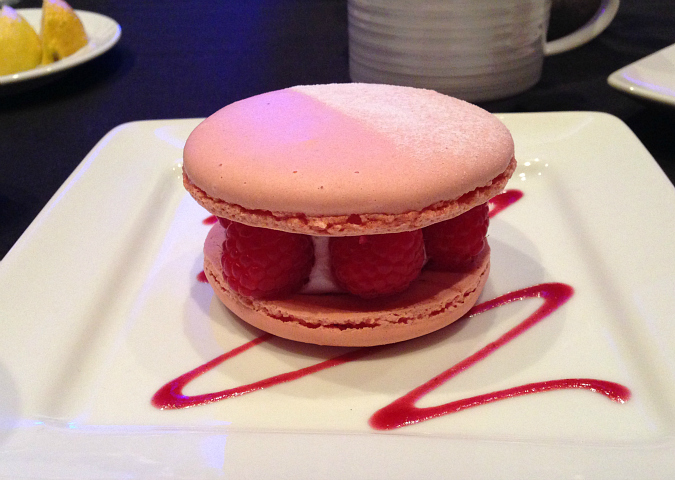 overall, the conference food left a little to be desired, but this dessert for lunch one day really was excellent.  the paris hotel made each of us a giant french macaroon.  the shell had a great almond flavor, and the inside had a delicious cream with fresh raspberries.  i loved it!  (luckily, i was able to snag a second one from another conference attendee who didn't want hers, so i brought it back to the hotel room for ryan to enjoy!)

we ate at a few other places too while we were in vegas.  one worth mentioning was tamba, which was an indian restaurant.  they had a lunch buffet which we had one afternoon and we really enjoyed it.

(ps: most of these photos are from our iphones because i always feel so awkward whipping out my gigundous camera in a restaurant.)

My goodness, I want to go out to Vegas just for the food. What a spread.

This is my favorite of all your Vegas posts. I had no idea that Vegas had this much to offer when it comes to food! Thanks for sharing all your suggestions!

Everything looks amazing and yummy! It makes me hungry right now.