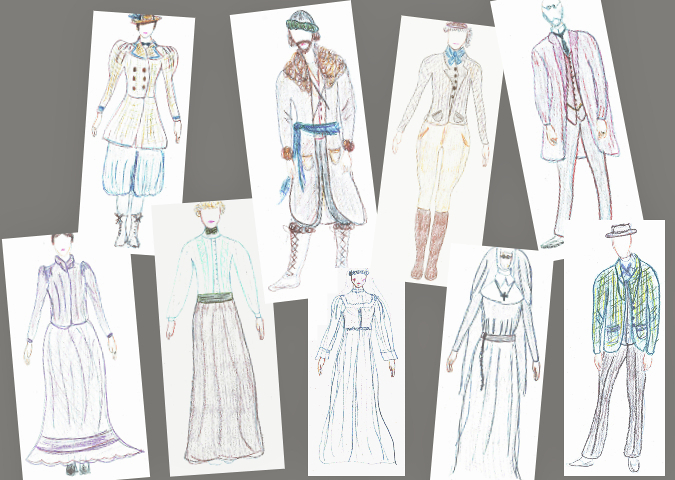 we been hard at work recently focusing on an upcoming show this fall at our university.  in addition to building the set, ryan is also doing the lighting design and the audio design for the production.  i'm thrilled to be in charge of wardrobe.  i'm designing the costumes, make-up, hair/wigs for the show!

the show is set in 1899 norway, so it has been fun to research that era and location.  there are some great characters in this show with some cool costume opportunities.  i've been sketching away (it's been years since i've had a reason to break out the colored pencils) getting all of the designs ready for tonight's rehearsal which is the first rehearsal where the cast will come together for the first time to read through the script as their characters and the designers will present their designs to the cast/crew.  it will be fun to see how all of these initial designs morph and change over the next several weeks as we see which actor/actress is playing which character.

You two sure do have your work cut out for you! The costume sketches are great. I am looking forward to seeing this show after all of your hard work on it.

Wow, the sketches are excellent. I always knew you could draw, but you really out did yourself this time. I hope you do not have to sew the costumes from scratch, as well.