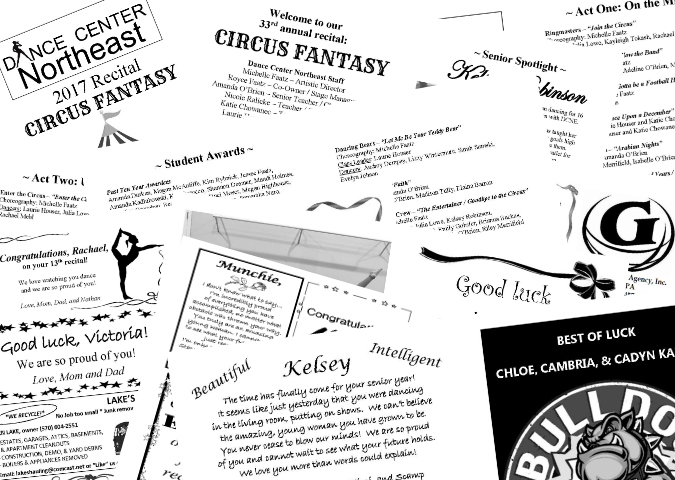 man oh man.  i don't typically get on rants on the blog, but i have to take a moment today to rant.

one of the many things that i'm in charge of for my studio's dance recital this coming weekend is the programs which will be handed out to each audience member.  i have been working on the program for the last several months and i'm really thrilled with the way it turned out.  the other day, i took the programs to our local staples to have them printed.  i was so happy when they called earlier than i had expected to say that the programs were ready to be picked up.  i ran over to staples to pick them up only to find that every single page had thick black ink smudges down the right side from the copier.  it looked horrible.  clearly the copy machine needed to be cleaned.  when i brought it to the attention of the workers, they agreed that the machine needed to be cleaned, but they didn't seem too fazed by it.  (mind you, people paid good money to place ads in our program, and i'm sure they would not be happy to see ink smudges all over their ads.)  all of the programs had to be re-run, and i had to leave there empty handed since they wouldn't be ready for several more hours.

staples called again later in the afternoon to let me know that the re-printed programs were ready.  since i was in the middle of dance rehearsal, i asked ryan to go pick them up for me on his way home from work.  when he got there, he sent me a text saying "you're not going to believe this, but when they re-printed your order they did it single sided instead of double sided!!!"  by this time i was fuming.  ryan told them they had to re-run the order because the programs had to be double sided.  they told him they would do it right away, and it would be done in 30 minutes.  well, 90 minutes later it was finally finished!  while they were printing our programs for the third time, i broke away from rehearsal for a few minutes to run up to staples to meet ryan and to try to see what on earth was going on with them.  luckily the third version of the programs looked good.  ryan waited for them to finish while i returned back to dance.  at the end of the night when we both got home, we realized that staples forgot to give us our usb jumpdrive back with the order!  that was really the icing on the cake.

unfortunately, this was not our first negative experience with staples copy/print center.  a very similar thing happened when running the programs for last year's recital too, and there was an issue with the programs for our christmas show this past winter.  i mean, come on, people!!!  how hard is it to print copies and to follow the very specific and detailed instructions on the order?!

i'll be giving my fingers a work out folding and stapling a couple hundred programs over the next few days!

Unbelievable!!! It certainly makes you wonder about having any future work done there, but I don't know where else you could have copying done.

After the third try, they should have not charged you for the order.
I wonderful it all staples are that bad.