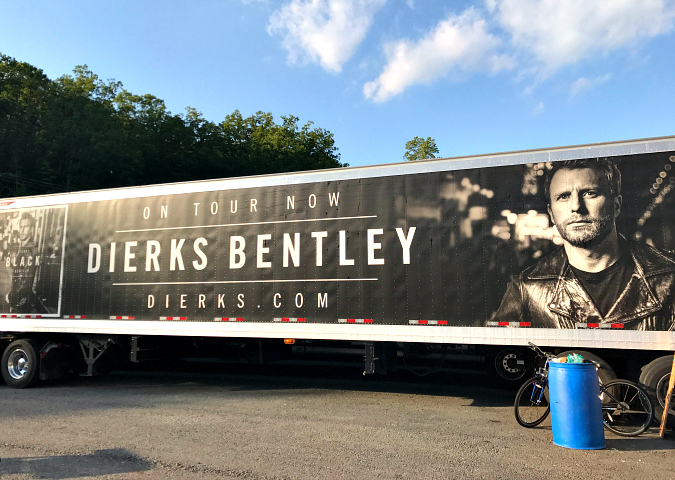 on saturday, ryan and i worked the dierks bentley tour that was in town (and needless to say, we're both exhausted).  ryan worked the load in, the run of the show, and the load out.  i met up with him in the evening to work the load out since i was tied up during the day with dance recital rehearsal.

even after all of our years in theatre, it never fails to amaze me how much work goes into making these touring shows happen.  the broadway touring shows that we work in the theatre throughout the fall/winter/spring are intense, but the concerts that we work at the pavilion in the summer months are a whole different beast.  it really makes me wonder if the audience appreciates the number of people behind the scenes working around the clock to get these shows to the stage.  the answer is no, especially for this crowd since most of them were drunk . . .

. . . anyway,  ryan snapped a few photos on his phone during the day.  i got there early before my call time for the load out and was able to hear a majority of the show, even though i didn't know who dierks bentley was before saturday.  i kept asking, is this show a group or a solo act?  goes to show you i don't listen to much country music.

while we were waiting to start working, i was standing backstage with ryan when a very tall cowboy walked right past me.  i didn't think much of it, but then after the person passed by ryan was like, "ummm, do you know that was jon pardi who just walked right by you?!"  of course i had no idea who he was and that he was the opening act for dierks bentley.  a little while later, at the end of the show i was standing right at the edge of the stage with ryan ready to run on because we start loading out the concerts as soon as they end.  another incredibly tall man walked by me with a body guard on each side of him.  he smiled at me and winked as he passed.  i looked over at ryan puzzled.  he was like, "okay, so that was just dierks bentley!"  yikes, i guess i better look these singers up before i work any more of these concerts this summer.  ryan and i were joking about how i had no idea what dierks bentley looked like, yet his face is printed ginormous on the sides of the trucks that were right next to me!  it was pretty funny.  anyone else would have been falling all over him, yet there i was half asleep at that hour of the night.  ha!

we were both on lighting crew for this show which was nice, because i love it when ryan and i are both are on the same crew, but as it turned out we really didn't get to work together much at all since we were each at different stations.  oh well, maybe for the next show! 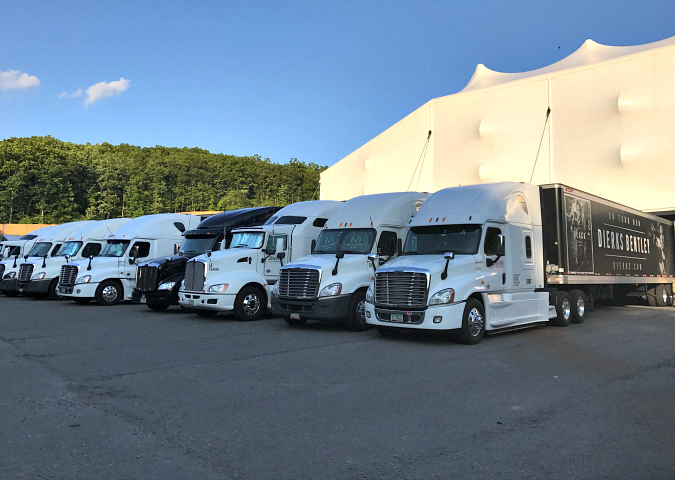 ^a line up of tour trucks early in the morning, ready to be unloaded.^ 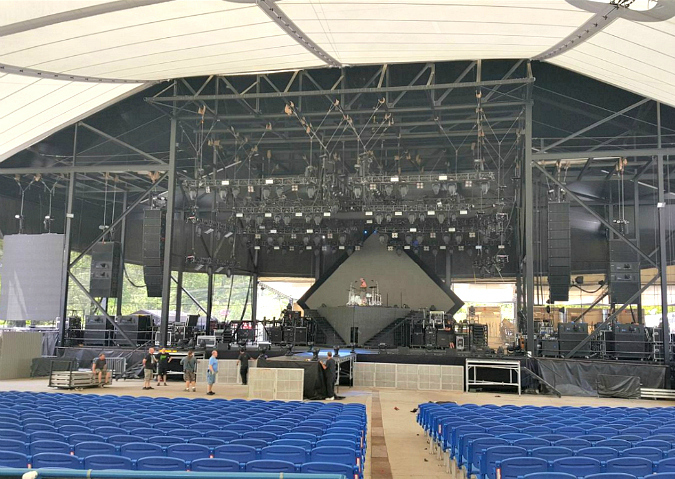 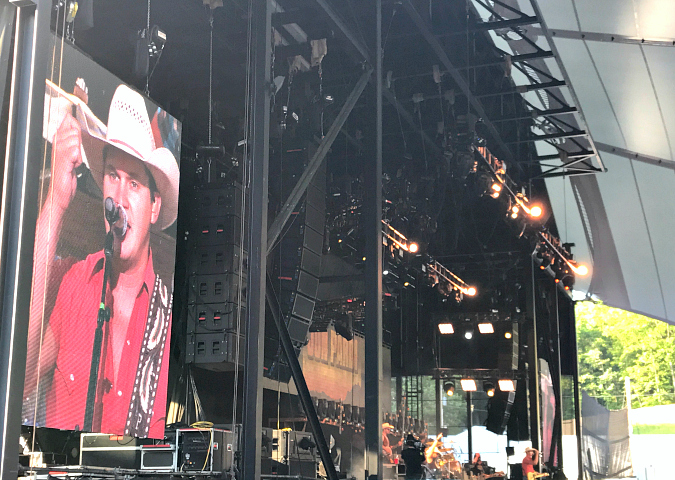 ^between sets, ryan took a minute to run out to snap a picture during the opening act.^ 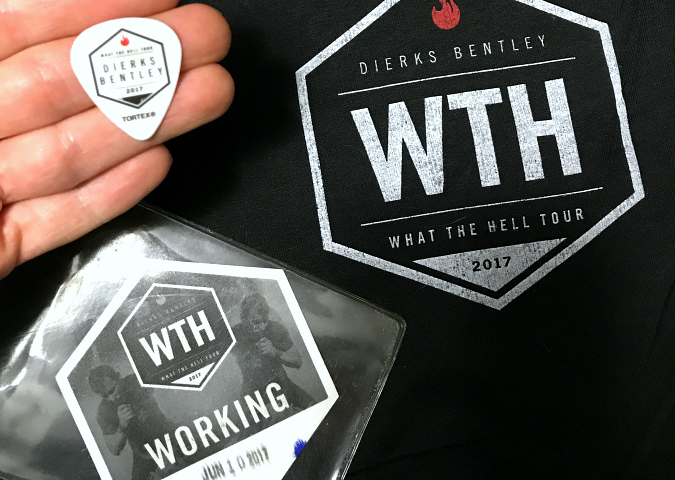 ^ryan frequently ends up with guitar picks after concerts.  it's pretty cool how he has a collection of concert picks, shirts, and silks (the working badges) from all of the years he has worked there.  i keep saying we have to do something cool with all of them.^ 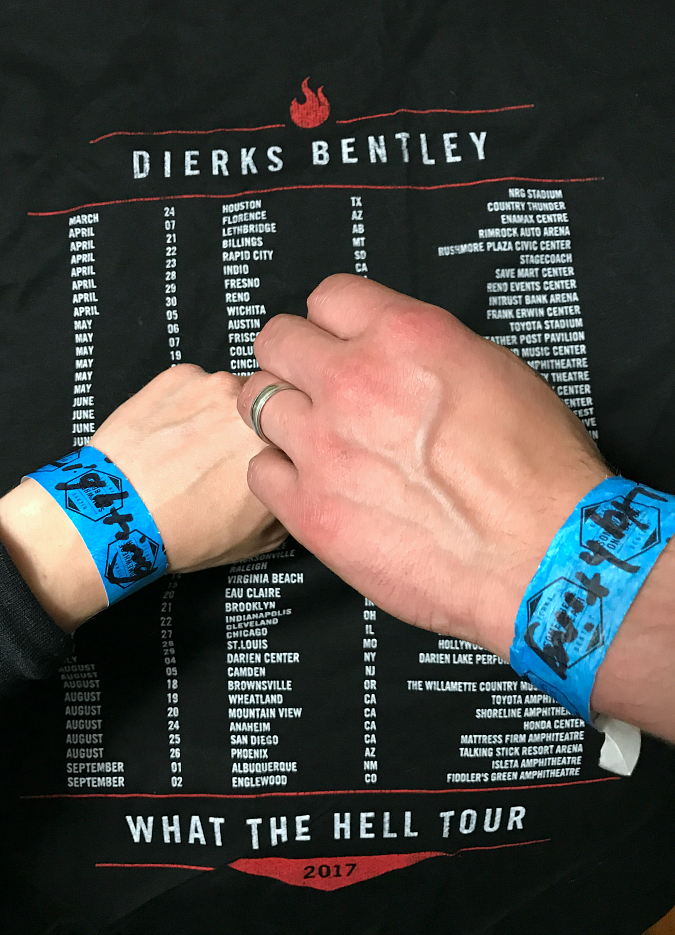 I would not have recognized him either. No one know what it takes to run a show because it looks so smooth and easy from the audience. I guess that is a reflection of the good job being done by the stage hands.

That is a serious amount of huge trucks to unload and load again! It is just amazing how much equipment goes into one short show! I would recognize Dierks Bentley but not John Pardi and probably not most of the performers that appear there, so don't feel bad.