a quick weekend getaway in massachusetts for nicole's wedding 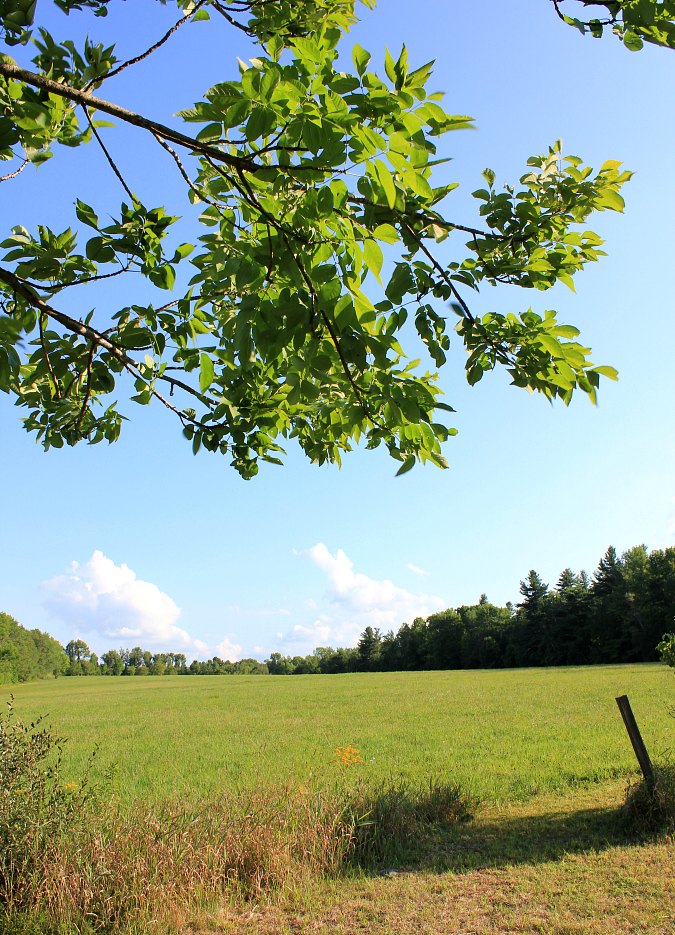 this weekend, my dear friend nicole (who i have known since preschool) got married in western massachusetts, so we took a quick trip up to new england this weekend for her wedding.

we hit the road early saturday morning and drove up to the town of northampton, massachusetts, which is a cute little college town with a quaint/trendy downtown main street scene.  (vegetarian and vegan restaurants lining the streets as far as the eye can see.)  we were starving after driving for over 4 hours, so we grabbed a bite to eat and walked around for a little bit to stretch our legs.

after checking out northampton, we headed to the neighboring town of florence, to check into the vegetarian bed and breakfast where we were staying.  the b&b is owned by a sweet couple who live completely off the grid and make all of their own energy via solar panels.  they also have llamas, emus, peacocks, guinea hens, chickens, dogs, and a donkey on their property.  it was an interesting experience to say the least.

we headed over to west chesterfield for nicole's wedding on saturday afternoon.  she lives on many acres of conservation land.  the wedding ceremony was held in a meadow right behind their house, and the reception was right in their backyard.  it was a small, simple, and beautiful outdoor summer wedding.  nicole looked absolutely beautiful and we had a great time.  (the food was incredible too!)  after partying until after 11pm, we headed back to our b&b for some rest.  the next morning, a majority of the wedding guests met up with the bride and groom for sunday brunch at a historic building in the center of the town of florence.  i'm glad nicole organized the brunch, because it was nice to be able to see everyone once again before heading home.

we snapped a few pictures during our quick two-day massachusetts wedding getaway (some on my real camera, but most on our phones).  we also took some video, which i'll share as soon as i edit it all.  here are a few pictures from saturday and sunday . . . 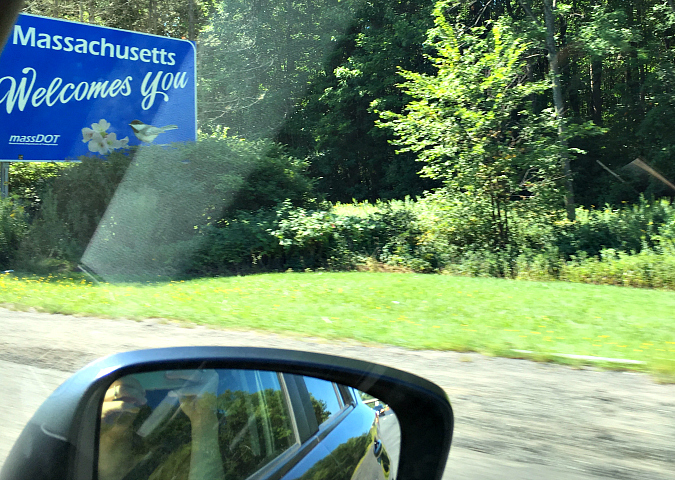 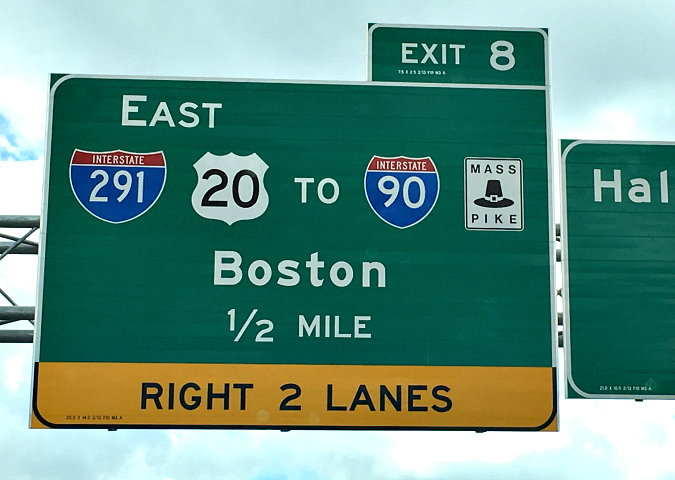 ^ryan got a kick out of the little pilgrim hats on the massachusetts turnpike signs!^ 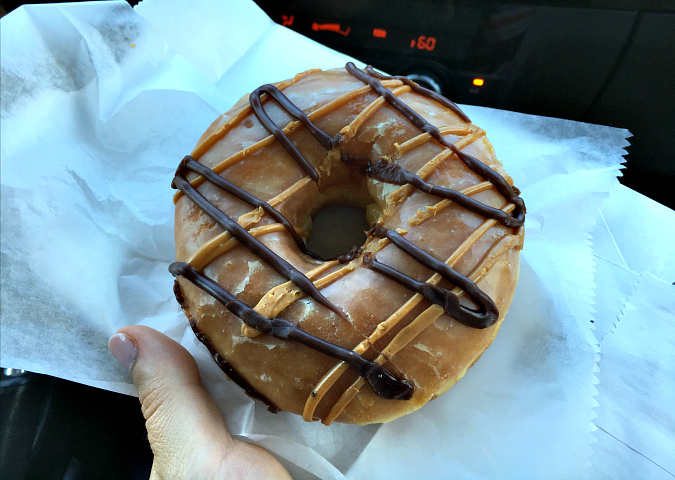 ^after we ate lunch in northampton on saturday afternoon, we spotted a cute little doughnut shop across the way.  we walked in to check it out and found this "elvis" doughnut which was a massive fluffy doughnut with banana glaze topped with peanut butter and chocolate.  it was really good!^ 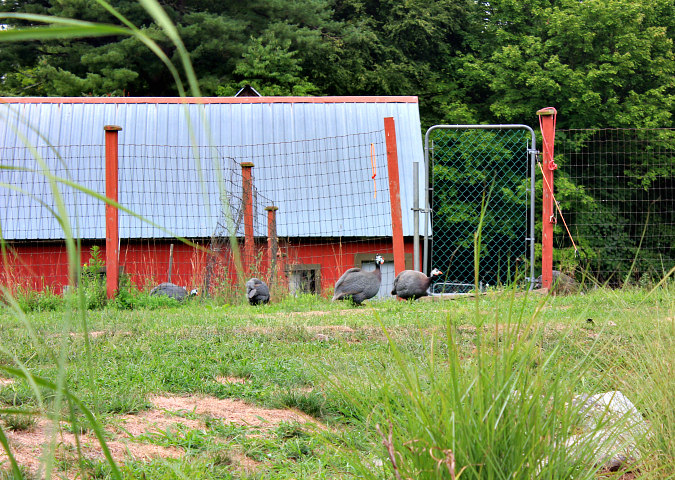 ^there were guinea hens running all over the place day and night at the b&b!^ 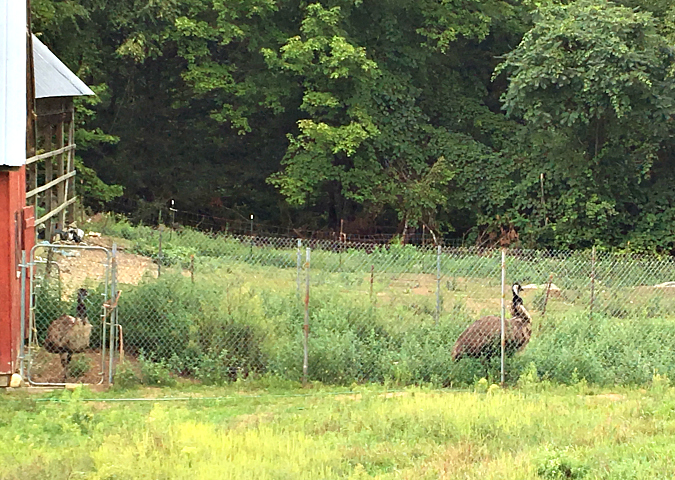 ^the emus were nuts.  when they talk, they make a drumming sound.  it really sounded like someone was out in the field with a bunch of bass drums.  i've never heard anything like it.^ 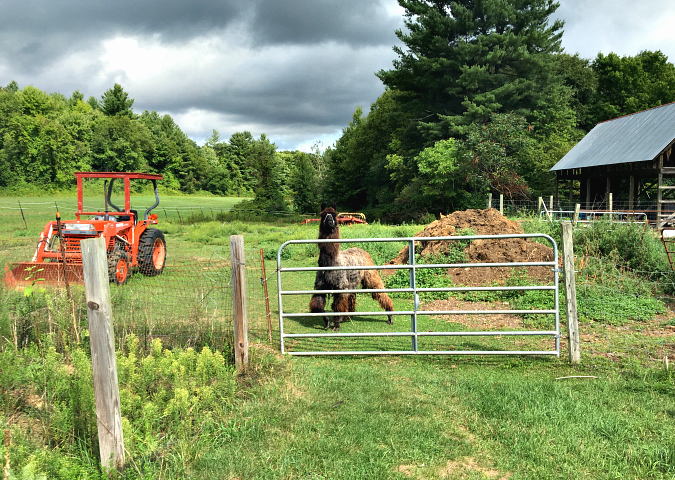 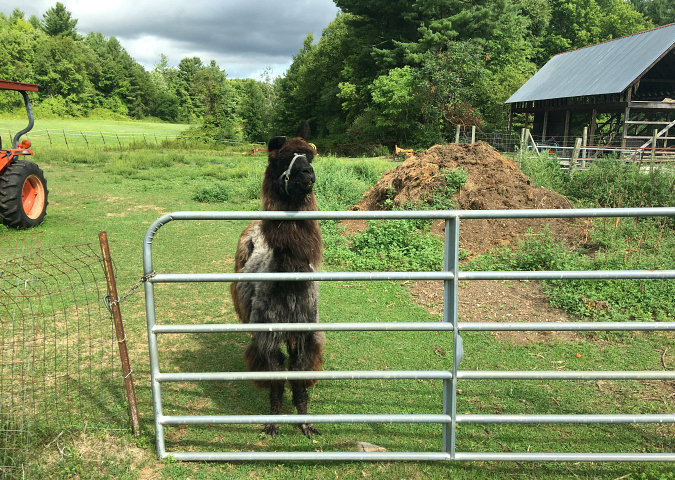 ^ryan made friends with this llama the morning we left.^ 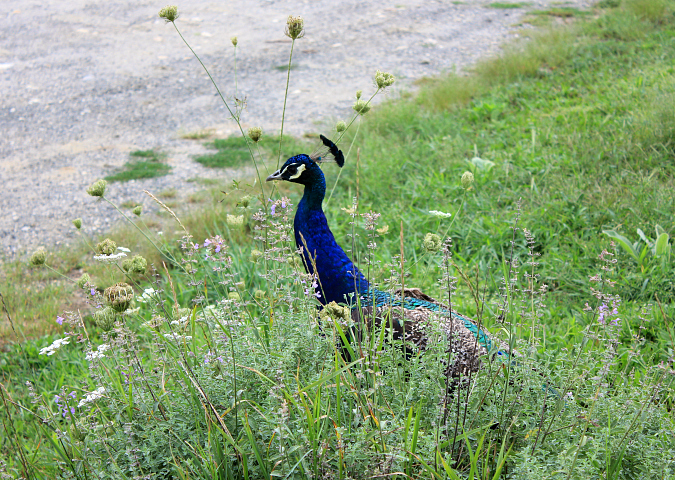 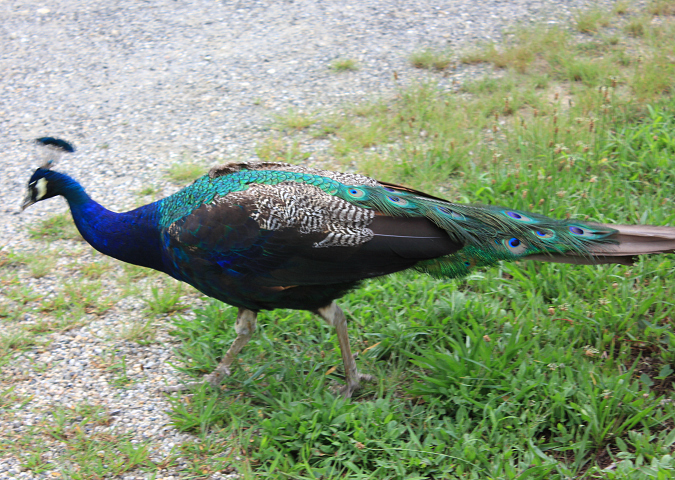 ^there were 9 peacocks on the property!  they totally ran the place too, it was pretty funny.  when we were eating breakfast on sunday morning, they came right up to the front screen door and sat on the front step looking in, waiting for someone to come out and feed them!  when we left, the b&b owners gave us a peacock feather as a souvenir.^ 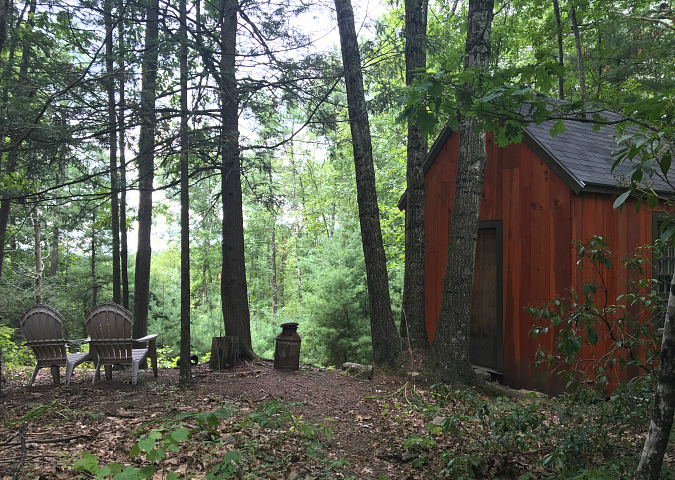 ^the b&b owner is really into henry david thoreau, so he built by hand a replica of thoreau's cabin on his property!^ 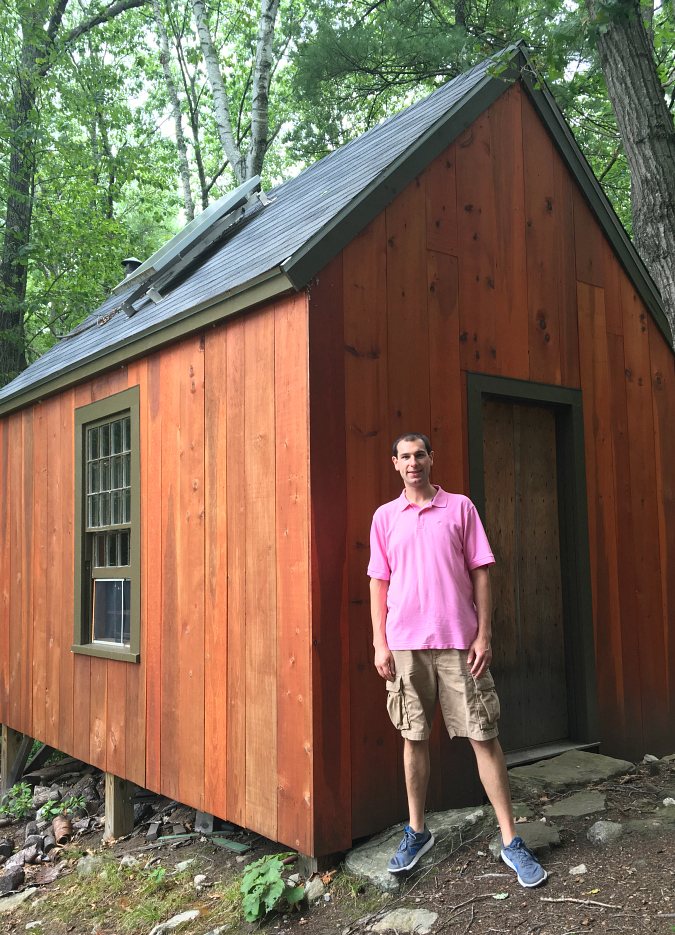 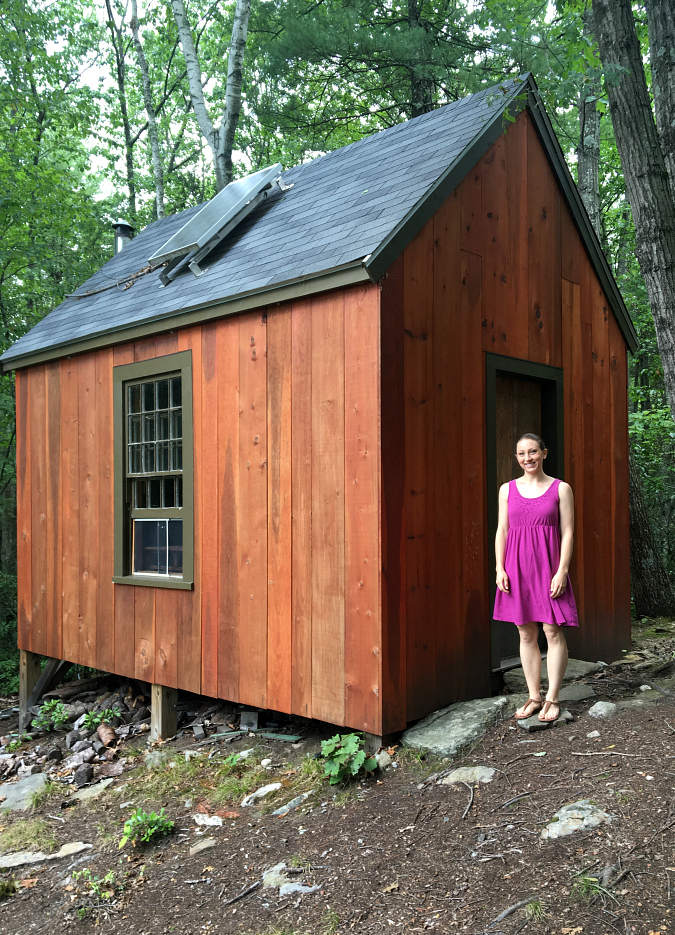 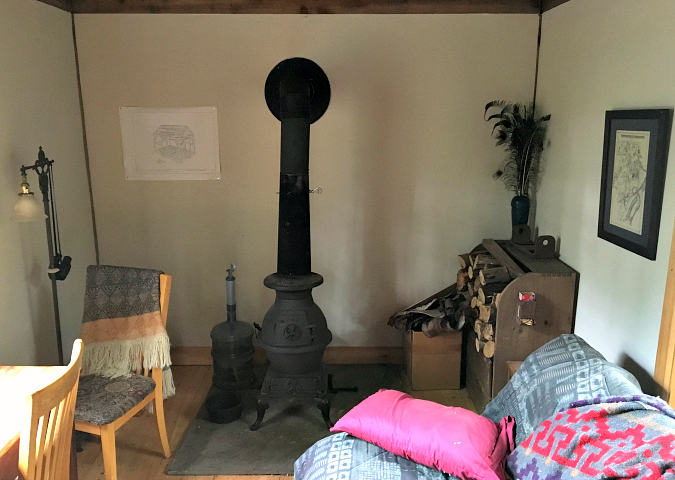 ^he uses the cabin as his "man cave" i guess.  he wrote an entire book that has been published about building this cabin and he wrote the book in the cabin.  it was neat, but i'm happy to report that we didn't spend the night in there.^ 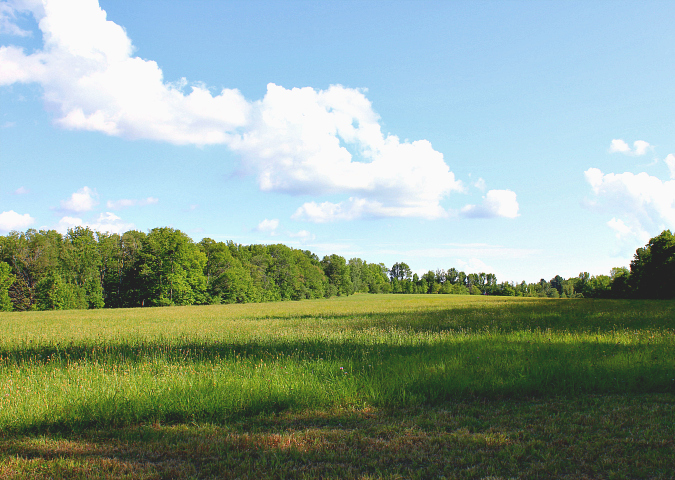 ^this magnificent view is nicole's backyard!  (it was also my view from where i was sitting for the wedding ceremony.)  it's conservation land, so it can never be developed.  let's just take a moment to appreciate that "backyard" view!!!  ryan was ready to move to new england based on the view from this meadow alone^ 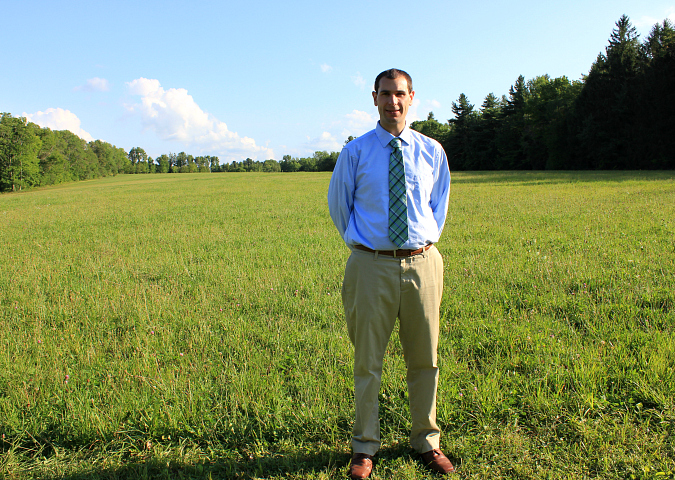 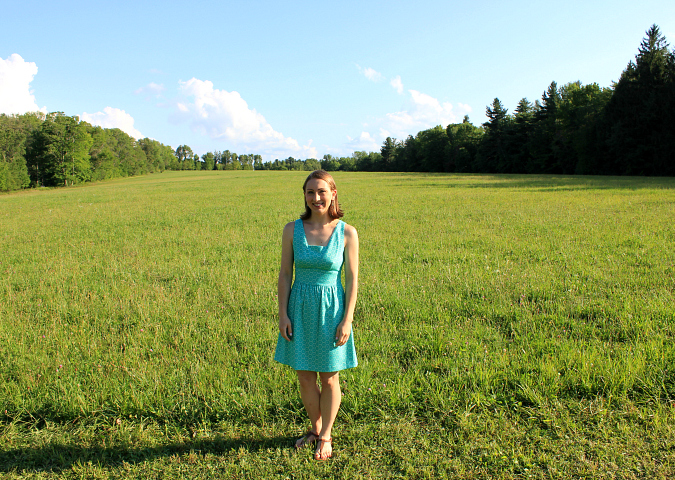 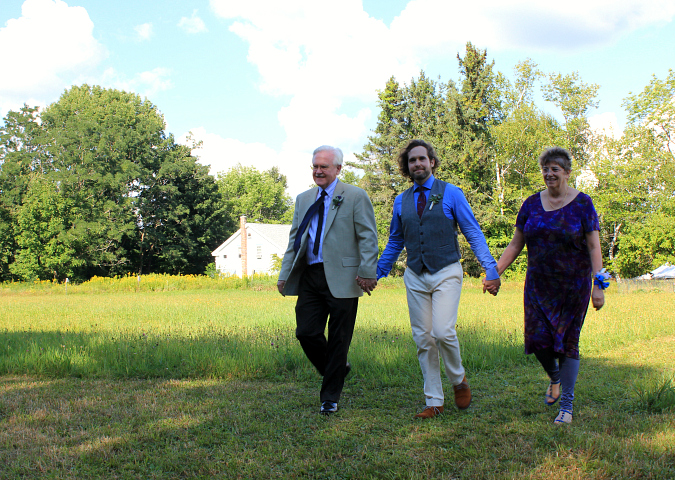 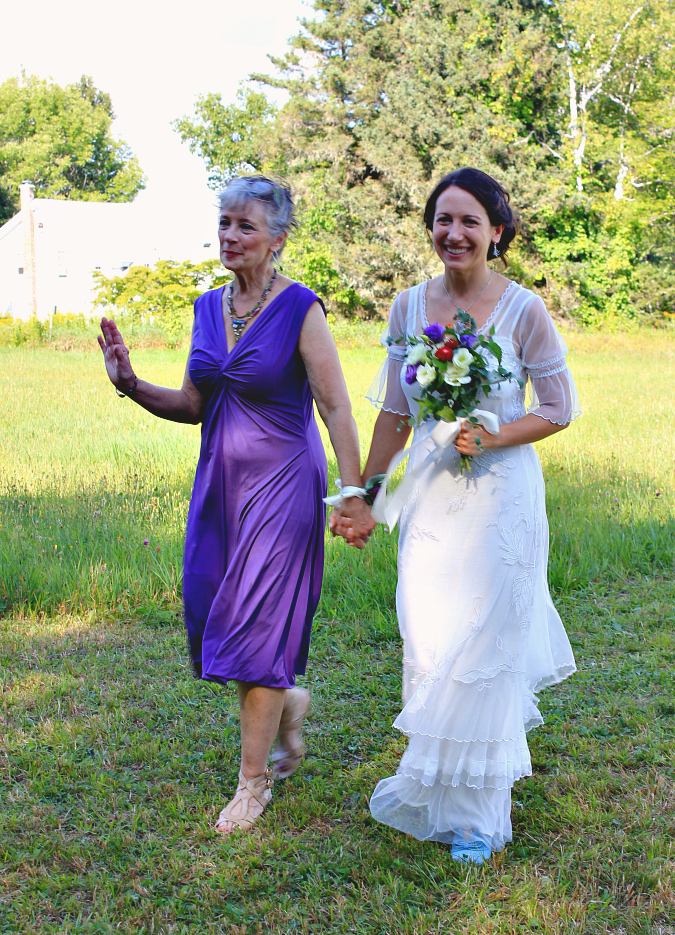 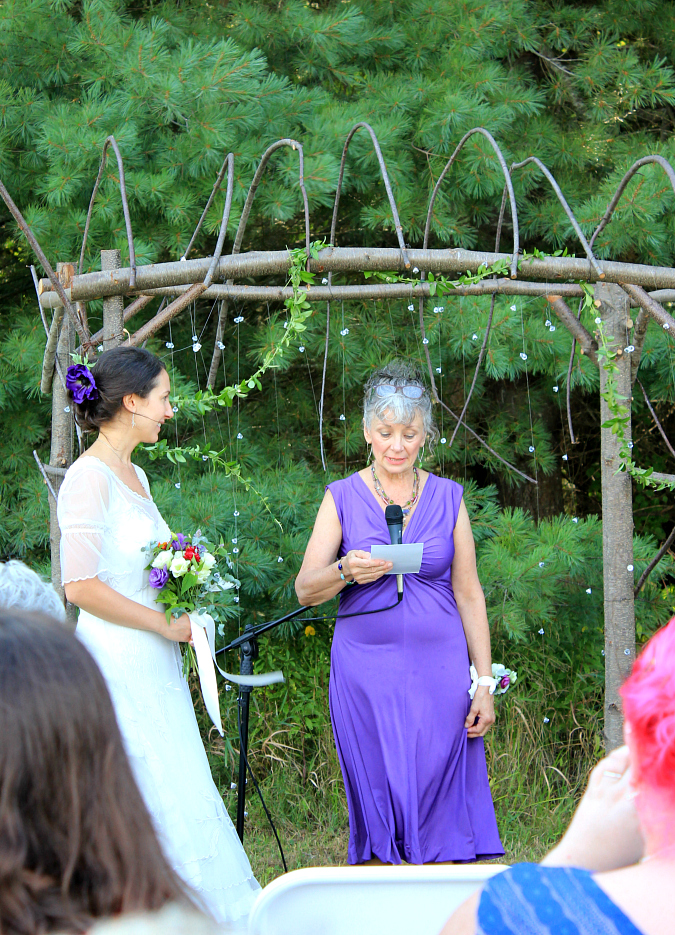 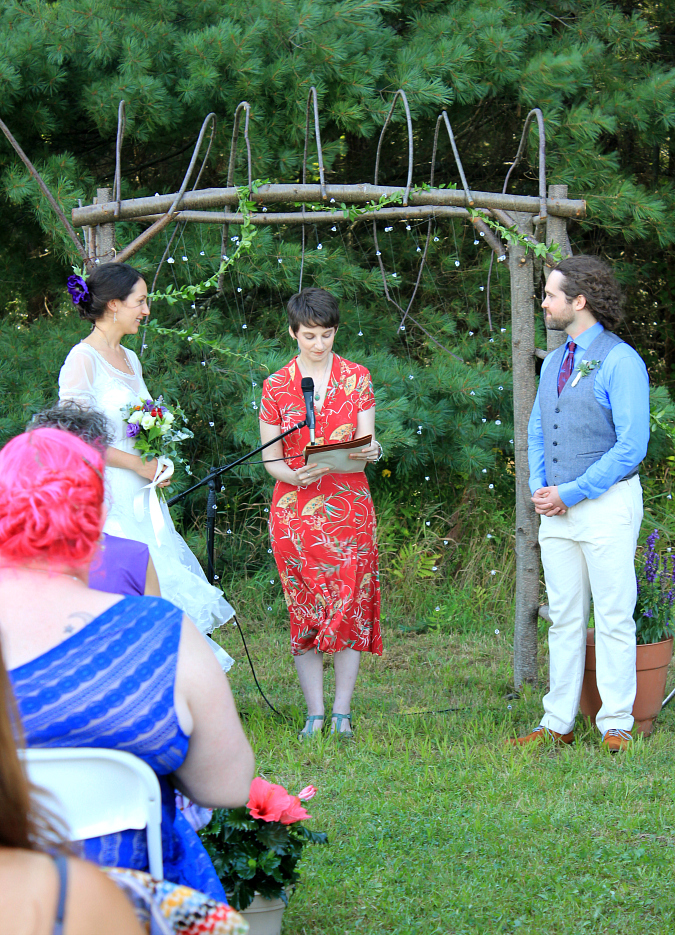 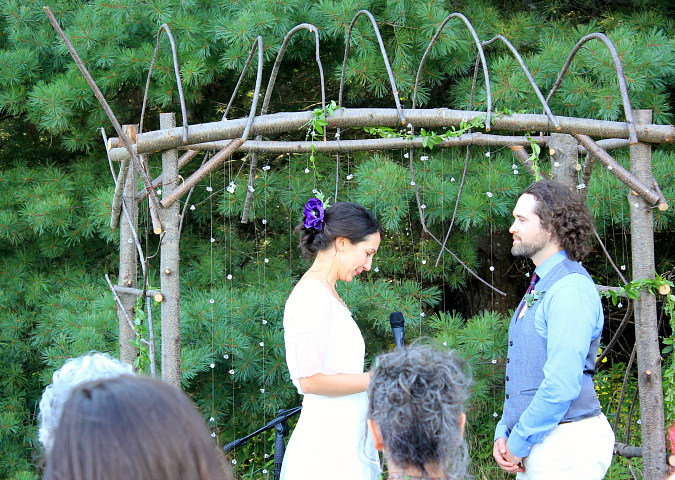 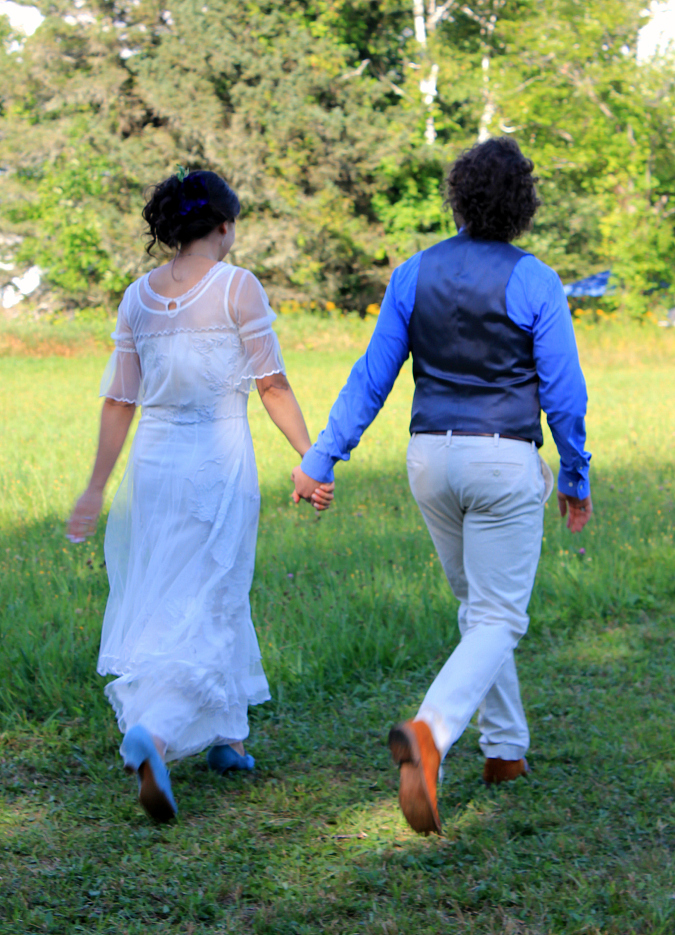 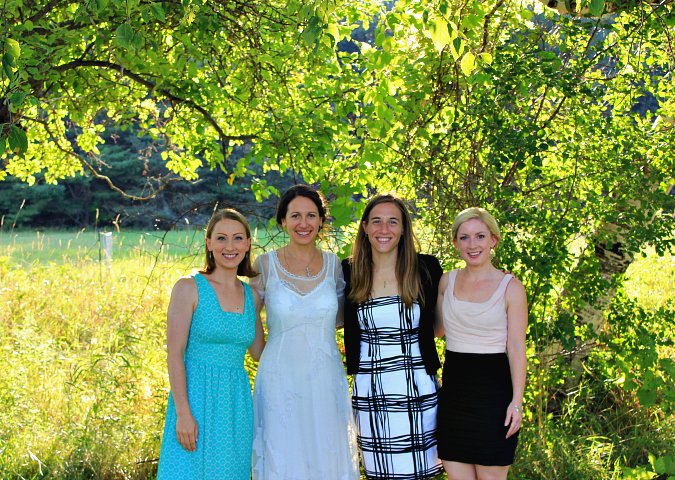 ^it was so nice that 3 of nicole's high school friends were able to travel from pennsylvania to massachusetts for her wedding. it was a nice little reunion too. i absolutely love this picture.  i'm so glad ryan snuck in with our camera behind the wedding photographer to snap this photo as a memento!^ 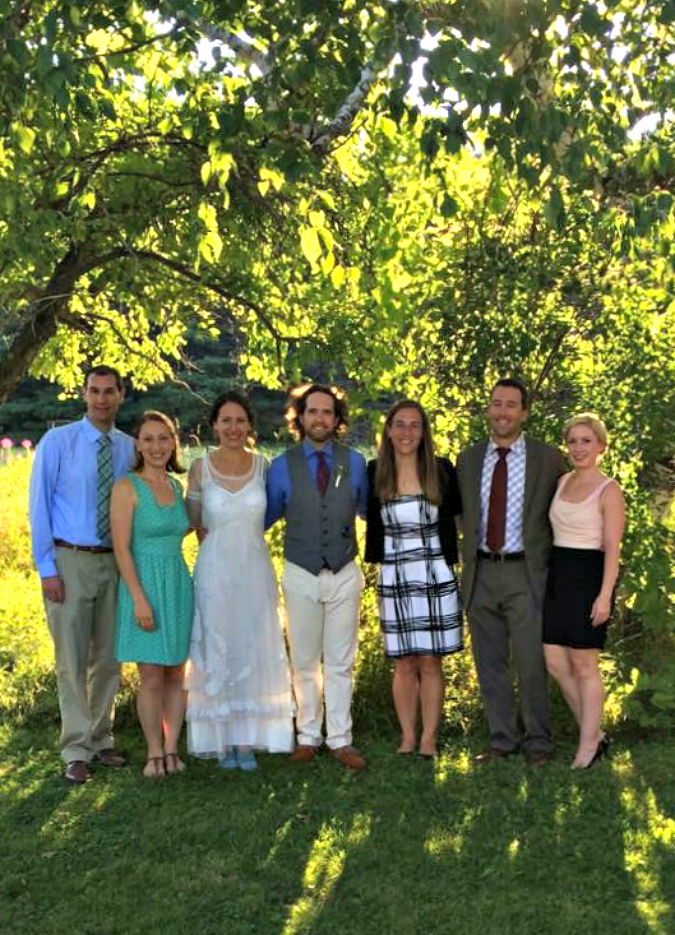 ^we didn't get a group shot on our camera because the wedding photographer snapped it so fast, but our friend ashley's dad did manage to snap it quick on his cell phone.  i'm bummed that it's really blurry, but glad we have it!^ 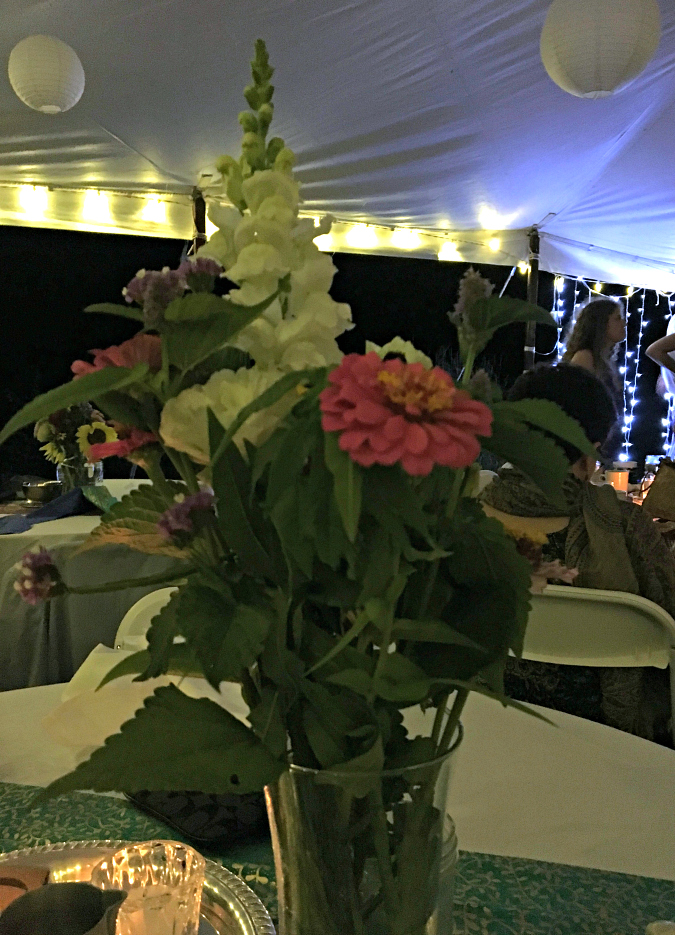 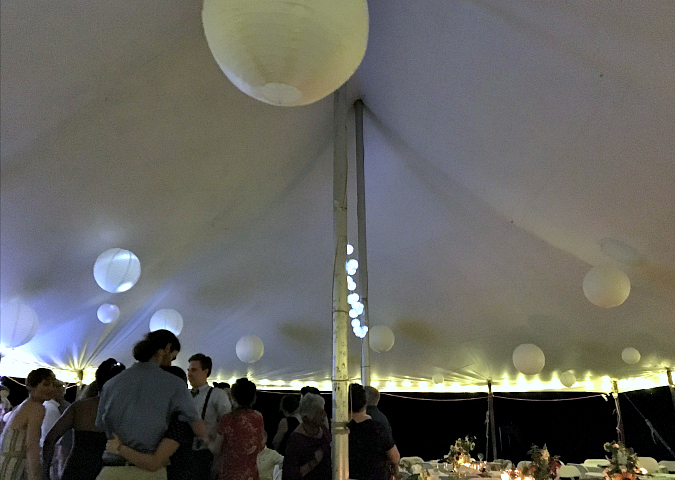 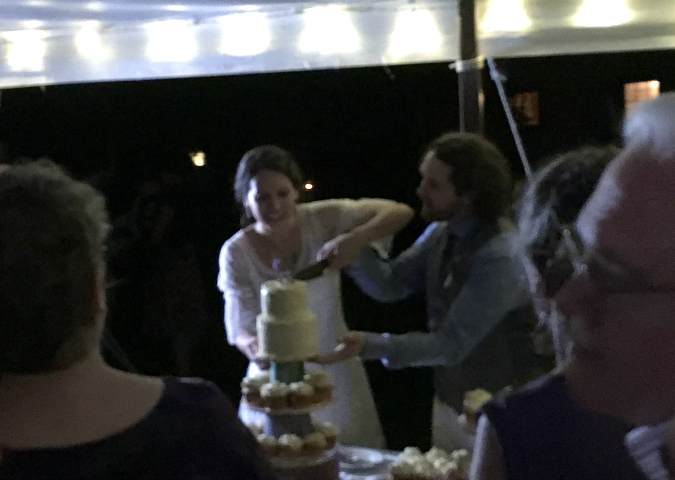 Nicole looked absolutely beautiful. Her dress was perfect and loved her shoes. That part of Massachusetts seems peaceful and serene. I am glad the weather cooperated for Nicole's special day. What a great reunion.

Such a beautiful day for a wedding! The location is beautiful. Nicole's dress is so pretty. I'm glad you were able to be there for her special day.