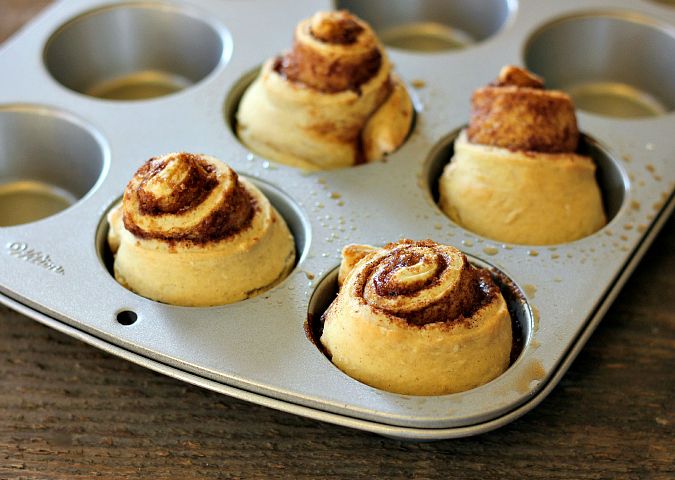 sunday morning was one of those rare occasions when we had nowhere to be and could stay in our pajamas lounging around the house.  days like that call for fun breakfasts eaten leisurely, and cinnamon rolls sounded perfect to us.  we love traditional cinnamon rolls made with yeast, but we just didn't feel like waiting for yeast to rise.  it was a lazy sunday morning after all.  instead of waiting, we made quick cinnamon rolls.  without the yeast there is no rise time which means you get to shove a warm gooey cinnamon bun in your mouth that much faster.  perfect for those of us who are lazy and impatient.

this recipe comes together so quickly and bakes in a matter of minutes.  it's dangerous how easy it is to make these cinnamon rolls.  it's probably a good thing then that this recipe only makes 4 cinnamon rolls, perfect to serve 2 people.

i guarantee you won't miss the yeast.  the baking power and baking soda do their job to make these cinnamon rolls puff up and they are so light and fluffy.  no rock hard hockey pucks here, my friends.  of course you can't have a cinnamon roll without covering it in cream cheese glaze.  it just wouldn't be right to leave that part out.  so, we covered them in cream cheese glaze, sat in our pajamas and enjoyed them alongside some scrambled eggs and coffee. 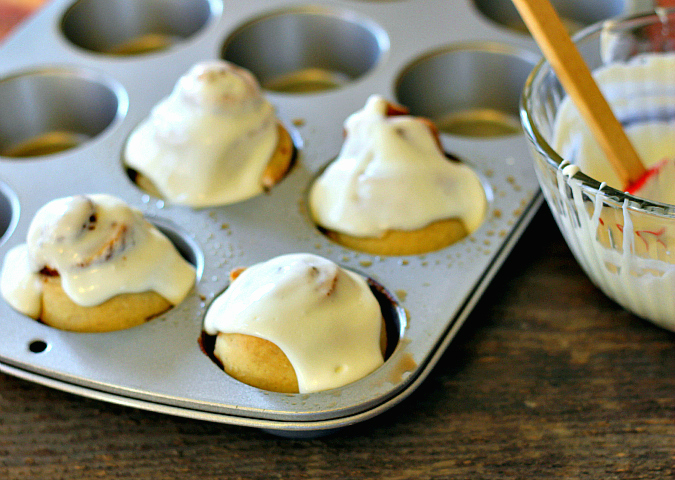 directions:
preheat your oven to 375 degrees F and grease 4 cups in a muffin pan.  in a bowl, combine the flour, baking powder, baking soda, and granulated sugar.  in a separate bowl whisk together the milk and vinegar.  combine the milk with the dry ingredients and stir.  add 2 tablespoons of the melted butter and stir until a soft dough forms.  turn the dough out onto a floured work surface and add flour to the dough as needed so that it is not too sticky.  (note: the dough will be very soft.)  roll the dough out into a rectangle (approximately 8x10 inches).  brush the dough with the remaining 1 tablespoon of melted butter.  evenly sprinkle the brown sugar and the cinnamon over the dough, making sure the dough is well covered.  cut the dough into four evenly sized long strips.  roll each strip up and pinch each seam shut.  place each roll in each greased cup in the muffin pan.  bake for 15-18 minutes.

meanwhile, beat together the softened cream cheese and the powered sugar.  add cream as needed to reach the desired glaze consistency.  frost the cinnamon rolls as soon as they come out of the oven.  serve hot.

The cinnamon buns look so tasty. I can even smell the hot buns coming out of the oven. Great with a cup of coffee.

These look delicious and it's great that it only makes four! I will have to give them a try.