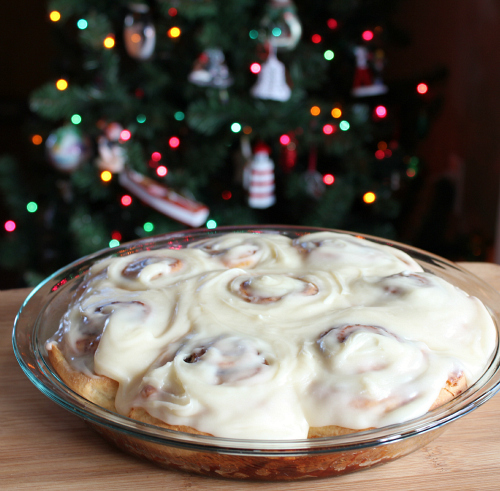 if you mention the words "cinnamon rolls" in our house, you are guaranteed to be met with several eye rolls and a few moans and groans.  we love cooking, and we love baking, but we sure hate making cinnamon rolls.  we have tried, time and time again, to make cinnamon rolls, but each and every attempt has left us with some sort of epic baking disaster that has yielded results that can be likened more to hockey pucks than to a soft and flaky breakfast treat.  inevitably, they end up in the garbage can and we end up aggravated   thus, all of our failed attempts have left us disgruntled and bitter with the world of cinnamon rolls.  it has started a war . . . a war between us and cinnamon rolls.

so, it came as no surprise to me that ryan was worried when i announced that i was going to try my hand at cinnamon rolls again, on christmas morning nonetheless.  my dear husband knew that it would take nothing short of a christmas miracle in order to produce a happy wife and a merry christmas if there was yet another cinnamon roll disaster in our house.

i read through countless cinnamon roll recipes, until i was confident that i knew everything there was to know about them, and i made these cinnamon rolls for christmas morning to go along with our breakfast.  i am happy to announce that they were the very first cinnamon rolls that were ever a success in our house!  they were warm, buttery, flaky, and sweet.

at last, victory is ours!  now i can declare our war with cinnamon rolls officially over.  merry christmas, indeed. 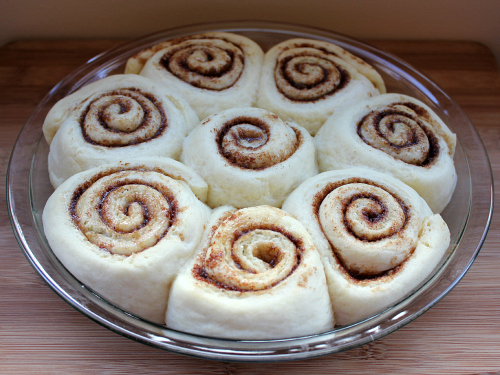 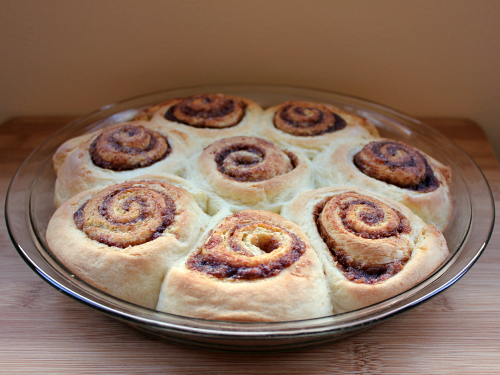 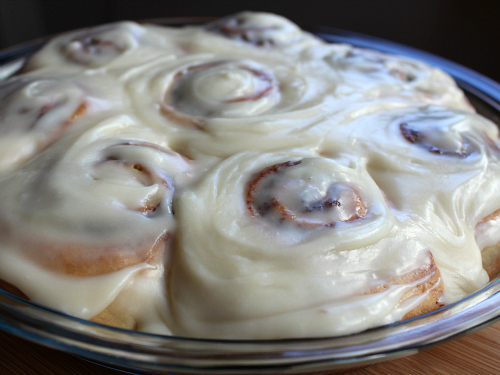 directions:
for the dough: in a sauce pan, over medium heat, melt the butter.  add the milk, stirring constantly.  warm the milk until it reaches 125 degrees F.  pour the melted butter and warmed milk mixture into the bowl of an electric mixer.  add 1 cup of the flour, along with the yeast, sugar, and egg.  beat on low speed for 3 minutes.  add the remaining 2 1/2 cups of the flour, and mix until the flour is incorporated.  (if the dough is too sticky add more flour in increments of 1 tablespoon.)  turn the dough out onto a lightly floured surface, and knead the dough until it is smooth (about 6-8 minutes).  form the dough into a ball and place the dough into a lightly greased bowl.  cover the bowl with plastic wrap and a kitchen towel.  allow the dough to rise in a warm area until it has doubled in size (about 2 hours).  once the dough has doubled, punch the dough down, and transfer it to a floured surface.  roll the dough out to a 9x11 inch rectangle.

for the filling: spread the melted butter evenly over the dough.  combine the cinnamon and sugar and sprinkle the mixture evenly over the buttered dough.  roll the dough into a log and place the seam side down.  cut the dough into 16 equal slices.  divide the rolls evenly between two lightly greased 9-inch round baking dishes.  cover the baking dishes with plastic wrap and a kitchen towel.  allow the rolls to rise in a warm area until they have doubled in size (about 45 minutes).  once the rolls have doubled, preheat your oven to 375 degrees F.  bake the rolls for 15 minutes, or until the tops are golden brown.  once baked, remove the rolls from the oven, and allow them to cool.

for the glaze: in the bowl of an electric mixer beat the butter and the cream cheese together.  add the vanilla and the powdered sugar and beat until combined.  spread the glaze over the rolls. 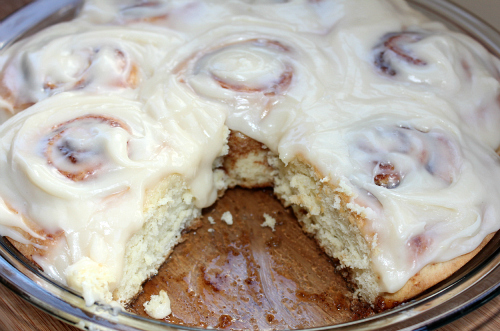 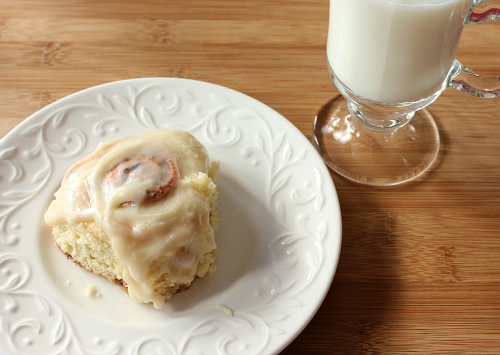 These look delicious! I made cinnamon rolls on Christmas morning, too! :) And I have the same dish - I don't know why I didn't use it... I wanted to use something "prettier" than a cookie/baking sheet, but didn't think to use my pie dish. For some reason, I thought I couldn't bake it in the oven (which was stupid, since it's for pies) so I passed right over it... I'll have to do that next time, haha!

Hope you had a Merry Christmas! :)

These look really yummy. I'll have to try this recipe. It has been a long time since I made cinnamon rolls and I remember that they took me until lunch time to finally be able to eat them.

Now you got you father in the mood for cinnamon buns and he is wondering why I have not made them is a long time. See what you started!

They do look delicious and a bit different with the cream cheese in the glaze.

What a lovely recipe!!!