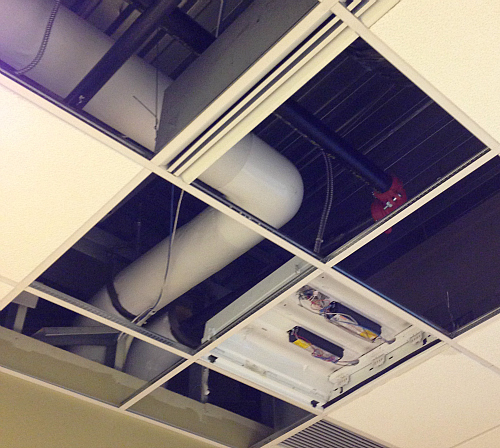 i was going to share a recipe for pancakes with you today, but that is going to have to wait until tomorrow because this story is just too good not to share . . .

i've mentioned before that my office building has been under construction for the past few months.  yesterday afternoon at work, i was sitting at my desk when the ceiling above me starting leaking from the florescent light fixture.  it started as a little trickle and soon became a rather large waterfall that landed right on my desk, on top of my computer, keyboard, mouse, phone, and paperwork.  needless to say, i was soaked along with most other things in my office.

i quickly grabbed two of the construction workers who were passing by in the hallway for help.  we had 10 garbage cans and recycling bins around my office trying to catch all of the water pouring out of my ceiling.

the construction workers had just installed new piping in my ceiling a few weeks ago.  later i found out that they were running water through the pipes for the first time in order to test out the system when it starting leaking in my office.  two of the pipes meet at a right angel above my desk.  the pipes are joined together by a joint (seen in red in the picture above).  apparently the bolts were not drilled in tight enough at the joint so when the pressure of the water hit the pipe joint at that right angle it came bursting out because the bolts were too loose.

there was so much water coming out of the ceiling that the one construction worker was actually wearing a rain coat with the hood up!

ryan and i stayed late cleaning up the water and drying everything off last night.  everything is going to take a while to dry out for sure.

i was tempted to come into work today with an umbrella, snorkel gear, and an inner tube just for a good laugh.

What a way to start your Monday! I hope everything dries for you.

You are lucky that the ceiling did not start to fall from the weight of the water and insulation and hit you on the head. Also the light fixture did not start sparking.
OH MW

Oh no!!! What a mess! How is your computer fairing after being wet? I'm glad that no fire started from the water hitting the fluorescent light fixture!

Glad you were ok!

I would like to invite you to enter my GIVEAWAY!!
http://infinitehouseofillusions.blogspot.com/